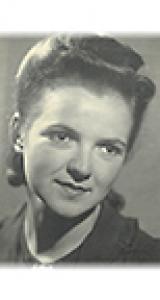 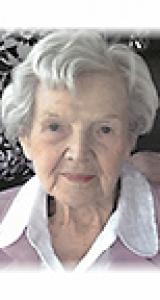 Born in Lviv, Ukraine July 7, 1920. Passed away in Winnipeg on January 10, 2020.
She was predeceased by her husband Jurij in 2002 and her sisters, Ivanna and Stephania.
She leaves to mourn her loss her daughter Larysa of Toronto, Ontario and son Boris (Sonja) of Winnipeg.
Lesia graduated from the First Ukrainian Academic Gymnazia in Lviv. The Second World War interrupted her plans to become a pharmacist. She and her husband Jurij found themselves in a displaced persons camp in Austria. They arrived in Winnipeg with their young daughter in 1950 where several years later, their son Boris was born.
Lesia was an educator at a nursery school for mostly immigrant children in the 1950's. She later worked at both the North Winnipeg Credit Union and Carpathia Credit Union from where she retired.
As a long-time member of the Ukrainian Women's Organization of Canada (OYK), she held posts of secretary and press reporter for the Winnipeg Branch.
She was an amateur actress and a
wonderful reciter of poetry. In the 1950's she performed in amateur theatre at the
Ukrainian National Federation Hall.
Lesia and her family have been members of St. Vladimir and Olga Cathedral since 1950. Her deep faith carried her through the
difficult times in her life.
By nature, she was a kind, gentle, humble person who never spoke ill of anyone. She was most supportive of her husband's
community work and her children's
professional and personal lives.
She will be greatly missed by family and friends in Canada, Ukraine and USA.
The last three and a half years Lesia spent under the compassionate care of a team of caregivers on the St. Johns unit at Holy
Family Home.
We wish to thank Sisters Servants of Mary Immaculate, Doctors Taras and Andrea Babick and the staff at Holy Family.
Funeral Mass at St. Vladimir and Olga
Cathedral at 10:00 a.m. on Wednesday,
January 15. Interment will follow at All Saints Cemetery.
Donations in Alexandra's memory can be made to the Lubov Foundation or Oserodok Ukrainian Cultural and Education Centre.