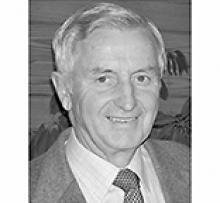 
Peacefully with his family by his side, our father, grandfather and great-grandfather, Gilbert Fontaine, passed away on January 7, 2020, at the Emerson Health Centre, at the age 84 years.
He is survived by his wife Louise (nee Trudeau); three sons: Roger (Tess), Gaetan (Roxanne), Michel (Diane); three stepsons: Robert (Rachelle), Denis (Patsy), Michel; one daughter-in-law (Aase), six sisters and numerous grandchildren and great-grandchildren.
He was predeceased by his parents, Gaspard and Marcelline Fontaine; first wife Yvette (Marion); one sister Gaetane; and one stepson Marc.
Dad was born in Letellier, Manitoba in 1935, was raised on a farm and farmed all his life. Dad was a hard worker. He was involved in numerous local committees such as Equipment Manager for the Letellier Blues hockey team in his younger days, Paroisse St-Pie de Letellier, Knights of Columbus Council #5413, Caisse Populaire de Letellier and served on both the local and provincial boards of the Manitoba Sugar Beet Producers Association. One of Gilbert's favourite hobbies was searching for and restoring military vehicles such as Jeeps and Half-Tracks. He became an active member of the Ghost Squadron taking part in parades and Remembrance Day ceremonies. Dad had a zest for life, a great sense of humour and enjoyed travelling.
The funeral service will be held on Saturday, January 18, 2020 at 1:30 p.m., at the St. Jean-Baptiste Roman Catholic Church. Inurnment will take place at a later date at the Letellier Cemetery.
The family wishes to thank the Emerson Health Centre staff for their wonderful care of our dad over the past four and one half years.
Donations may be made to the Emerson Health Centre in memory of Gilbert Fontaine.