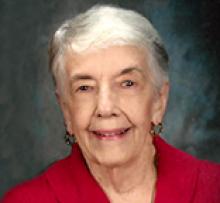 
Born April 28, 1924 in Winnipeg, MB,
Allison passed away quietly, on January 4, 2020 at the Rockyview General Hospital in Calgary, AB.
She will be sorely missed by sons, Russell (Karen), Roderick (Tilly) and Richard; and grandchildren, Jeffrey (Brenda), Erin,
Christopher (Jenny), Marcia (Derek) and Ryan (Odette).
Allison was predeceased by her parents, Archibald and Isabella Robertson, her older brother David and her beloved husband
Douglas.
After graduating from Daniel McIntyre Collegiate in Winnipeg, Allison worked at Great West Life and in the engineering
department at Canadian National Railway. Marriage to Doug followed in December, 1957, and she devoted herself to raising a
family on Fidler Avenue in Winnipeg, later
moving on to Regina and Calgary. Allison
enjoyed most sports, especially curling and golfing and she became quite a soccer fan in her later years. She was an optimistic person who was always ready with a big hug and
loving support for family and friends alike.
The family extends their thanks to the staff at the Chateau Renoir retirement residence in Calgary for making Allison's stay there a safe and enjoyable one.
Flowers are respectfully declined.

Messages of remembrance
may be left for the family at
www.southcalgaryfuneralcentre.ca