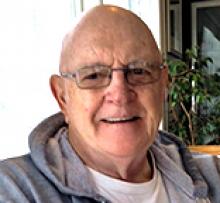 
It is with heavy hearts that we announce the sudden passing of Robert (Bob) Corrie, aged 80, of Gimli, Manitoba, on Thursday, January 9, 2020.
Bob is survived by his wife Audrey Corrie (nee Lewis); daughter Shelley Karpa (Nelson); son Brent Corrie (Pamela); and grandchildren, Jason Karpa, Jacqui Karpa, Mackenzie Karpa, Callahan Corrie, and Cavanaugh Corrie. Bob is also survived by his sister Joan Wright; and brother Jim Corrie (Cheryhl); and brother-in-law Larry Chesley. Bob was predeceased by his brother Donald Corrie; sisters-in-law, Barbara Chesley and Eleanor Corrie; and brother-in-law Peter Wright.
Bob was a longtime resident of the St. James area of Winnipeg, attending St. James Collegiate where he met Audrey. They were married in 1960, and started a longtime residence in the Deer Lodge community. After high school, Bob worked at Eatons and Sears, until joining the St. James Police in 1961 and began his career walking the beat on Portage Avenue, pulling doors while wearing his buffalo coat. Upon amalgamation, Bob began working out of the Public Safety Building with badge #376, and held various positions with the Winnipeg Police until his retirement in 1987.
Bob had many interests and an unquenchable entrepreneurial spirit. In parallel to his law enforcement career, Bob had a number of businesses including Shamrock Stables, and the Avondale Saddlery Shop on Portage Avenue, and after many years of foster parenting, he opened a group home for teenage boys. Bob and Audrey bought property east of Rosser and Bob ran his hobby farm for a number of years prior to buying and operating Torchwood Kennels, located on the west perimeter.
Bob and Audrey were residents of Westwood House for many years before moving to Gimli in 2006. Even before moving to Gimli, Bob and Audrey had cottages at Matlock and on Netley Creek. Since moving to Gimli, Bob continued to be active and was a regular at the Gimli Recreation Centre gym lifting weights. One of Bob's favourite pastimes was giving visitors pontoon boat tours around the bays of Siglavik.
We have long lost track of the number of cars, trucks, and other vehicles that Bob owned over the years. At last count, it must have been over 100. Bob always had time to stop and strike up a conversation.
Bob was a wonderful husband, father and friend who will be missed by all.
A celebration of Bob's life will be held later this summer. Details will be provided at a later date.
In lieu of flowers, donations can be made to the Heart & Stroke Foundation of Canada.