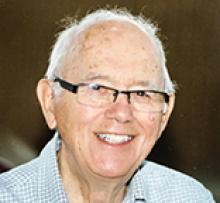 
It is with deep sadness that we announce the passing of Ted Moffat on January 11, 2020, at St. Boniface Hospital.
He is survived by his wife of 54 years, Margaret; children, Sharon, David (Tania) and Iain (Wendy); grandchildren, Holly, Malcolm, Taeven, Anna and Desmond; and siblings, Joyce, Eileen, Harold (Carole), Shirley, Doris (Charles), Allan (Bev) and Douglas (Linda). Ted is predeceased by his parents, Matthew and Margaret; and siblings, Stan, Keith, Myrle and Bill.
Ted was born in Portage la Prairie and attended the Salem District one-room school, and graduated from Portage Collegiate. He received his B. Sc. in Civil Engineering from the University of Manitoba and worked most of his life as a professional engineer with the Province of Manitoba Water Resources Branch.
He was a member and elder of First Presbyterian Church in Winnipeg. Ted was an avid gardener and a member of the St. James Horticultural Society, where he won many awards for his vegetables, fruit and pickles.
After retiring, he cherished his weekly coffee and lunch get-togethers with friends. Ted enjoyed travelling to many countries, including Russia and China, and numerous trips to Scotland. He also loved to entertain his friends and family with the vivid stories of his times working as a surveyor in the bush in Northern Manitoba.
In accordance with Ted's wishes, there will be no formal funeral service. A graveside service in Portage la Prairie will be held at a later date.
If friends so wish, donations may be made in Ted Moffat's memory to either the CancerCare Manitoba Foundation or Siloam Mission.