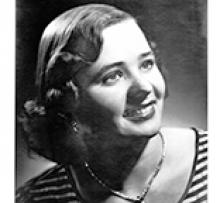 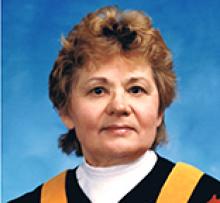 
Peacefully on January 12, 2020, Jeanette Henderson passed away at Health Sciences Centre in Winnipeg.
Jeanette was born in Kowel, Poland and emigrated to Canada in 1937. She lived near Sifton, Manitoba until she graduated high school and then moved to Winnipeg.
Jeanette married Ross Henderson in 1953 and they had a good life together for 56 years, until his passing in 2009. Jeanette and Ross met at a fishing lodge at Delaney Lake, Ontario. The guys at the lodge were throwing the girls into the water. They did not believe Jeanette when she said she could not swim. Ross rescued Jeanette from drowning when she did get thrown in the water and so they met.
Jeanette later learned to swim and taught swimming and lifeguarded first at the North YMCA and then for the City of Winnipeg until her retirement. She excelled at teaching those to swim who were most afraid of the water. Even after retiring, Jeanette's love for swimming continued and she was a regular face at Seven Oaks Pool.
Jeanette, Ross and their family enjoyed many years cottaging at Farlane, Ontario at the family cabin on Cache Lake. She knew all the best spots for blueberry picking and was more than happy to whip up some blueberry pancakes on the wood stove for you. She will be remembered fondly when we go for a paddle across Cache, or walk through the forest. Her knowledge of the flora and fauna around Farlane was unmatched.
She leaves to cherish her memory her children, Scott, Craig (Barbara) and Eric; her grandchildren, Glen and Lauren and her great -grandchild Nash; as well as her fur baby Dakota. A special thanks to the staff at River Ridge II and her companion Bev, who cared for her exceptionally, even when life was difficult for her.
A celebration of her life will be held on Saturday, January 25, 2020 at 2:00 p.m. at Glen Eden Funeral Home, 4477 Main Street, West Saint Paul, MB.