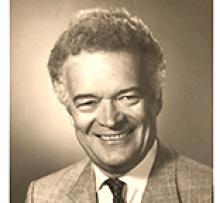 
It is with great sadness and fond memories that the family announces the passing of Don Dick on January 7, 2020.
Don will be lovingly remembered and deeply missed by his wife Sally (nee Shaw); his daughters, Barbro (Tim) and Tanis (Rob); and sons, Doug (Sherry), John (Britt), Paul (Stephanie), and Andrew (Kaela); grandchildren, John and Olivia, Hugh and Emma, Jessica and Kristofer, and Amelia; his sister Barbara Dow of Russell, MB; his nephews, Don Dow (Sherry) and Garth Dow (Glenis) and families; cousins and extended family; the Schuler family in Germany, and his brother-in-law Jim Shaw (Susan) and family.
He was predeceased by his first wife Ruth (nee Schuler); his parents, Alex and Marie Dick; and his brother-in-law Jack Dow.
Born in Winnipeg on March 31, 1930, Don enjoyed a happy childhood with his parents, Alex and Marie, and sister Barbara. Between the ages of four and 13 his family lived in Gretna, MB. Returning to Winnipeg to reside on Inkster Boulevard, Don attended Luxton School and St. John's High School.
Following jobs in banking and with Swift's Meats, Don commenced work in the life insurance business in 1953 as an agent for Sun Life. He entered the Estate Planning field and incorporated as D.A. Dick Estate Planning Ltd. in 1966. In his long and productive career Don excelled at his work with clients who were self-employed entrepreneurs. He was a member of the United Way Leader's Fundraising Committee and a charter member of the University of Manitoba Associates School of Business. He was well known and respected in the industry - his accomplishments recognized many times with professional awards.
In 1964 he married Ruth. They had four children and shared many precious family experiences and travel adventures until Ruth's passing in 1980. Fond memories of summers on the houseboat at Lake of the Woods were made. Don and Sally married in 1986 and the family grew with the addition of Paul and Andrew. As an older yet enthusiastic dad, Don once again gave high priority to fun family times enriching life with his passions for travel, golf, swimming, horses, and cycling. Loving connections with the Schuler family were shared and continue on. Family celebrations were frequently enjoyed with the Shaw family.
As a husband, Don was a truly loving and caring man and an outstanding provider. He dearly loved his six children and their many and varied accomplishments. In return, we all adored and greatly admired him.
Most grateful for his lasting and enriching friendships, Don enjoyed reflecting on a lifetime shared with treasured friends. He particularly cherished his sister Barb, who brought much support and laughter to his life. They shared many memories and special family times, and he enjoyed connecting by phone when travel became difficult in recent years.
Don had a deep faith. He was a devout Sunday worshipper, daily Scripture reader, and an Elder in the Presbyterian Church. As an active philanthropist, he gave generously of his time and money to various charities.
Don was thankful for his long, happy and productive life. He was guided by his faith to the certainty of life eternal, firm in the knowledge he will live on in the many lives he touched.
The family wishes to extend its deepest gratitude to Don's doctors, homecare workers (especially Brian) and the team of caregivers at St. Boniface Hospital for their exceptional care and compassion in his final days.
A Memorial Service will take place at 10:00 a.m. on Saturday, March 14 at Chapel Lawn Funeral Home, 4000 Portage Avenue with a reception to follow.
In lieu of flowers, please consider a donation in memory of Don to Presbyterian World Service & Development or Movement Centre of Manitoba.