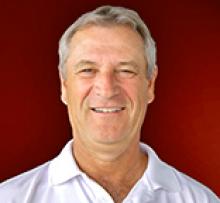 
Soon after the beautiful sunset that could be seen from his room at Selkirk Hospital on January 7, 2020, Bob passed gently into that good night. He was 65 years old. For two years Bob had faced throat and prostate cancer with determination and courage, never allowing his illness to defeat his spirit and love of life.
Bob's childhood in North Kildonan was a happy, active one. Born into a proud family of Scottish-Ukrainian-Polish heritage, he grew up to the sounds of his dad's bagpipe music and the aromas of his mother's delicious cooking. A natural athlete, Bob never walked to school - he ran - and throughout his school years he excelled at track, hockey and volleyball. Later in life he took up skiing, earning his instructor's qualifications.
But it was golf that became Bob's passion. A proud member of Pine Ridge Golf Club for 39 years, Bob enjoyed everything about The Ridge - the challenging course, the various events and competitions, the staff and members, the Ridger Cup that he helped initiate, the two holes-in-one he recorded, the couples' games, the patio and the spirited discussions that took place there; and especially he loved "The Group," who affectionately dubbed him "Rammer". He knew how lucky he was to have had such a fine group of friends with whom to play golf. Their love of the game as well as the occasional frustrations matched his own. As someone in The Group once commented, "You can't buy entertainment like this."
Bob was proud of his 32 year career as an Industrial Arts, Math, and Computer teacher at John Henderson and John Pritchard schools. He was recognized for his commitment to extra-curricular activities as an enthusiastic and dedicated volleyball coach and yearbook advisor. His students rose to his high expectations, winning many championships and achieving many successes. Instrumental in setting up one of the first junior high computer labs, Bob relished the challenge presented by the early days of technology in schools. It was like an exciting new career for him, and it ignited a life-long passion for computers (Mac only, of course!), technology, and all things Apple. He applied his impressive, largely self-taught skills to many notable projects including a Pine Ridge website and many wonderful travel videos under his Pelican Productions logo.
Bob loved to travel and he and Kathy enjoyed many memorable trips. Favourite among these were seven winters in New Zealand, two golf trips to Ireland, and, even while he was living with cancer, two European trips to Bohemia and Italy. Dinner at the Ramsays' was usually followed by Bob asking, "Have you seen our Bay of Islands - or Bohemia - or Italy video? Here, I'll put it on for you." Testament to his creative and technical ability was the fact that so many enjoyed these videos so much.
Bob lived life with gusto, and he would want to be remembered with smiles for all the great times. He leaves meaningful memories for those many students, colleagues, friends and relatives whose lives he touched.
Treasuring Bob's memory are Kathy, his wife of 38 years; sister Pat van Rysselt (Lou); brother Ken Ramsay (Barb); sister-in-law Geri Porath (Ken); and brother-in-law Dwight Shewchuk (Becky) of Celina, Texas. Bob will also be remembered by many nieces and nephews and their children: Melanie, Brent, Brandon and Grace Spulnick; Lisa, Garth, Anah and Kevin Rempel; Adam, Lacey, Fiona, Caoimhe, Mirren and Edana Ramsay; Stacey, Allen, Hailey and Deklan Kent; Jason, Jenna, Calvin and Summer Porath; Ali, Scott, Ella, Brynn and Mielah McKay; John and Niki Shewchuk; Charles Shewchuk; Jennifer, Barrett, Katherine, Brooklyn, Barrett, Jr. and Julianne Kingsriter; Elizabeth, Dillon, Grace and James Lackey; as well as many other relatives and friends.
Bob is now reunited with his beloved parents, William and Helen Ramsay, and his in-laws, Michael and Lena Shewchuk.
Heartfelt thanks go to Bob's extensive medical team at CancerCare Manitoba, especially Doctors Butler, Saranchuk, Graham, Lindenschmidt; and Dr. Doan. Sincere appreciation also goes to John Mackay of Community Paramedics Service, and the Palliative and Home Care teams at Interlake-Eastern Regional Health Authority and Selkirk Hospital for their compassionate care.
A Celebration of Life for Bob will be held on Friday, January 31 at 10:00 a.m. at Glen Eden Funeral Home, 4477 Main Street, East St. Paul.
If so desired, donations in Bob's memory may be made to the CancerCare Manitoba Foundation. Make a donation to