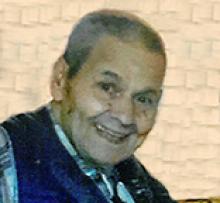 
It is with deep sadness that the family of Guido DeRose announces his peaceful passing on January 14, 2020 at the age of 86, at St. Boniface Hospital.
Guido will be lovingly remembered by his daughters, Luigina Stewart (Patrick), Maria DeRose, Lucia Nelson (Derek); son Tony DeRose; grandchildren, Pam, Paul (Christina), Celeste, Christopher (Nadine), Sara (Travis), Melanie, Adrianna (Jared), Mary Jane and great-grandchildren, Chase, Vincenzo, Tessa, Jaxon and Charlee. He will also be missed by his sister Maria in Toronto and numerous nieces and nephews that touched his life.
Predeceased by his wife Antonia DeRose; his son Vincenzo DeRose and his many brothers and sisters.
Guido was born March 16, 1933 in Malito, Italy. He came to Canada in 1954. He was a hard-working and devoted husband, father and gardener, who took great pride in his children, grandchildren and great-grandchildren.
Condolences will be on Tuesday, January 21, 10:00 a.m. at Holy Rosary Church, 510 River Ave., followed by Mass at 11:00 a.m. with Father Gerry Ward.
The family would like to thank the staff at St. Boniface Hospital on 6A South and the staff at CancerCare Manitoba.
In lieu of flowers, donations can be made to CancerCare Manitoba, 675 McDermot Ave., Winnipeg, MB R3E 0V9.