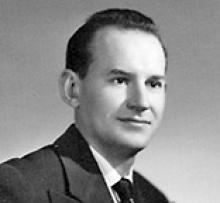 
Walter passed away peacefully on January 10, 2020, at the age of 94. He lived independently in his home in East Kildonan as long as he could, and spent the last several months in the hospital. Walter died according to his wishes at Concordia Hospital, after a full and long life.
Walter was predeceased by his loving wife Louise; son Gordon; grandson Clifford; brothers and their spouses, Leo (Olive) and Ernie (Helen); sisters, Tillie (Ian) and Gertrude (Dave); parents, Lydja Gross and Henry Rudolf, and niece Beverley (Barry) Van Brabant.
Walter will be lovingly remembered by his daughter Lori (John) Crawford; grand-children, Kayla and Jordan of Winnipeg; son Douglas (Carla) Rudolph of Las Vegas, Nevada, and many special Rudolph nieces, nephews and their families, Brian (Nadine), David (Marie-Pierre), Barbara (Edward), Janice (Ian), Karen, Stuart (Kathleen), Lorraine (Ken), Donald, Colin and Sherryl Primmer-Leandro, as well as the Crawford family and other family, friends and neighbours.
Walter was born on February 23, 1925 in Winnipeg to Lydja Gross (from Russia) and Henry Rudolpf (from Austria). He attended Lord Selkirk School and came from very humble beginnings working hard to help support his family at a very young age. He even taught himself to play the accordion so he could earn money performing, and became a talented musician throughout his life. After school, Walter joined his brothers working for their father's business, H. Rudolph Furs, in Elmwood until the onset of the Second World War, when he served in the Canadian military as a teleprint operator in a variety of locations overseas. Walter had many remarkable stories of his time in the war, and concluded his service working on the war crimes trials in Aurich. Upon discharge, he resumed his work in the fur business and met this lovely girl, Louise, at the lake resort known as the Pala Club. Louise and Walter fell in love, were married in 1950, and were blessed with two sons - Douglas and Gordon. Several years later they were blessed again with a third child, Lori Anne, through adoption. During these years Walter and his brothers formed a successful construction company, W. H. Rudolph Construction, and they built many houses, apartments and warehouses. Walter was a brilliant businessman and after retiring from construction he became interested in the stock market and "worked" almost every day trading stocks until the summer of 2019.
In his retirement, Dad always kept busy and enjoyed gardening (grew the best tomatoes), dabbling in music, making things out of scrap wood, vacationing in Hawaii, working on the family cabin and spending time with his family and grandchildren who he adored. Dad had a heart of gold beneath his sometimes tough exterior, and helped so many people in his life. He often wondered if helping people was his true purpose in life. He was especially dedicated to helping children like his son, Gordon, who had an intellectual disability. Dad also had many struggles and challenges throughout his life; he had rheumatic fever as a child, he battled prostate cancer, had close calls in the war, and he narrowly escaped the Dugald Train Wreck in 1947. All of these experiences just made him stronger and more determined to keep going and live life fully. He could do just about anything he put his mind to, and it was near impossible to win an argument with him.
Dad was a remarkable man and enjoyed sharing his life stories, and often displayed a good sense of humour, even in his last few months. He often reflected upon all the great women in his life and said they were his "angels," and his grandchildren were "the light of his life." Kayla had a strong bond with her grandpa and visited him almost every day in the hospital.
He was very grateful for the visits and notes he received from his special nephews, nieces, family, friends and neighbours, especially over the past few months. He will be so profoundly missed by all of them, so many of whom always knew him as Uncle Wally.
We will deeply cherish the precious memories and will continue Dad's legacy in helping others in his honour, and live life to its fullest using the many lessons we learned from him. We love him deeply and he will be sadly missed, but we are so grateful for having him in our lives and for so long. He will live on in our hearts forever.
The family wishes to thank the many special staff at Concordia Hospital for the compassionate care.
There will be no formal funeral service, however family and friends are encouraged to share their stories and memories of Walter.
In lieu of flowers, donations can be made in his memory to St. Amant Centre.