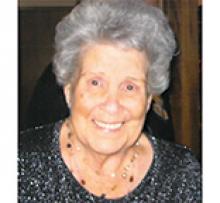 
Peacefully and with family by her side, Barb passed away at the Grace Hospital in Winnipeg on Sunday, January 12, 2020, at the age of 90.
Barb is lovingly remembered by her children, Linda (Victor) Desrosiers, Larraine Gill, Karen (Geoff) Born, Diana (Paul) Sembrat; and grandchildren, Daniel, Dennis, Steven, Ryan, Alex and Anna. Barb was
predeceased by husband Tom in 2015; her brother Edward; and sister-in-law Mae Aseltine.
Barb was born on June 23, 1929, in Pine Falls to John and Ethel Aseltine. She was an excellent golfer, especially in her younger years, growing up in a golfing family with her brother Edward. She also enjoyed curling, playing the skip position. Barb worked at The Hudson's Bay and Lazaruk's Grocery Store in Pine Falls / Powerview before meeting the love of her life - Tom Gill - and marrying him in 1952. Tom and Barb enjoyed golfing and going to movies. They travelled by train to Vancouver several times and to the U.S. west coast. In Pine Falls they raised four daughters with Barb being a stay-at-home Mom, which was no easy task. Barb was calm and loving throughout.
When the Pine Falls CN Station closed in 1973, the family moved to Winnipeg where Tom worked at Symington Yard. Barb took up bowling at Windsor Lanes, made many friends, enjoyed being treasurer and won many trophies. She liked living on Arundel Road so close to the grocery store, bank, bowling alley and hairdresser, loving the community and maintaining friendships to this day. Tom and Barb liked going to the casino and taking trips to Las Vegas.
Barb supported her children and grandchildren by babysitting, preparing delicious Sunday dinners, going on excursions to Tinkertown and museums, attending school concerts and cheering at bowling tournaments and baseball, soccer, basketball and hockey games.
In 2006 Tom and Barb sold their house in Windsor Park and moved into an apartment in St. Vital. Barb cared for Tom as his Alzheimer's progressed until Tom moved into a personal care home in 2009. Barb liked living near her daughters, receiving regular visits from them and the community dog, Roxy. Barb was a bingo fan and enjoyed going to bingo with her Windsor Park friends.
Barb moved into Riverside Lions Assisted Living in 2014. It was the perfect place for her - food provided, laundry done, could participate in bingo, birthday parties and musical events. But she could also have her own comfortable suite to watch her tennis, curling, Blue Bomber football and game shows. The family wishes to thank the staff and tenants, friends, for making her stay there so enjoyable.
Barb and Tom celebrated 62 years of marriage before Tom's passing in 2015. In June 2019 Barb celebrated her 90th birthday and was thankful to be alive and relatively healthy. In October, 2019, Barb suffered heart failure but came back to her old self after rehabilitation. She moved into Parkview Place in December where the staff welcomed her and made her very comfortable.
Our family is very thankful for the extra time we got to spend with Mom/Grandma over the past few months. Barb celebrated Christmas with all her children and grandchildren which was a blessing to all of us. Barb, Mom, Grandma, we love you and we will miss you!
There will be a private family interment at a later date.
In lieu of flowers, consider a donation to the charity of your choice.