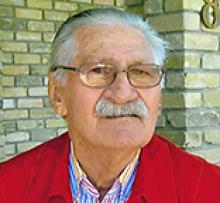 
Our beloved Opa passed away peacefully on January 1, 2020, in Stonewall Hospital after a short illness.
He will be dearly remembered by his loving wife, Kaethe Toews, whom he married on March 18, 1950. Seventy years of devotion.
Willy lived a long life that began in Gnadenfeld, Ukraine, where he lived and worked with his family. His father, Franz, was taken by the Russians, never to be seen again and Willy was drafted into the Russian Army. This was not agreeable to him, so he and a few friends fled into the dangers of making their way, dressed in visible army uniforms.
Aboard the "Volendam", with many others, he landed in Paraguay and married his beloved Tina; daughter Brigitte and son Werner were born there. He loved to tell amazing tales of their life there filled with exotic animals (like the unwilling pet monkey) and fresh fruit.
Wanting a better life for his children, he brought his family to Canada in 1957. Being "The Boss" was his job and his pride at his long-standing career at Monarch Machinery on Erin Street, beginning in 1964.
Willy was predeceased by his parents, Franz and Susanna Isaac, mother-in-law Margaret Quiering, his siblings in Germany, and by his beloved son Werner Toews in 2015.
He will be remembered by his daughter Brigitte (Art); daughter-in-law Theresa, grandchildren: Tim (Kendra), Jennifer (Ian), Chris (Melyssa), Kate-Lyn (Joseph) and Kayla, great-grandchildren: Lexie, Xander, Preston, Tanzi, Annea, and all the relatives in Germany, who he travelled to reconnect with after his retirement.
There will be a come and go Celebration of Life at Sargent Avenue Mennonite Church, 926 Garfield Street North, Winnipeg, MB on Tuesday, January 21, 2020 from 1:30 p.m. to 3:30 p.m. The family will be having a private interment at a later date.
A special thank you to Michelle Loehmer, for all your support.
In lieu of flowers, donations can be made to the Mennonite Central Committee.