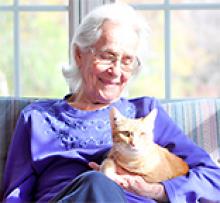 
Lavina Jean "Vinie" Glass passed away peacefully on January 7, 2020, in Winnipeg, at the age of 91 years, after a life well lived.
Born in Deloraine, Manitoba, she was the daughter of the late Percy and Nora Glass and the youngest of five close-knit siblings - Noble, Lloyd, Vivian and Vern. She moved to Winnipeg in 1943, but never lost her ties to Deloraine, relishing many summers with her family on nearby Lake Metigoshe in the Turtle Mountains.
A professional woman ahead of her time, starting in the late 1950s, Vinie worked in what was then a largely male advertising industry, advising local Winnipeg businesses such as Birt Saddlery, Wilson's Furniture and Success Business College, as well as the occasional political campaign. She also taught creative communications at Red River College and became a friend and mentor to many along the way.
Once holding the Manitoba record for longest women's high school softball throw, Vinie played in the Canadian loop of the "league of her own" with the St. Vital Tigerettes championship team from 1949 to 1954, and was later inducted, with the team, into the Manitoba Softball Hall of Fame. A member of the Puffin Ski Club, Vinie was a regular at Holiday Mountain Ski Resort in La Riviere, Manitoba in the 1950s, and a lifelong fan of professional sports. She and her ukulele would ride the Grey Cup train to Toronto, and she once sent a fan letter to the baseball great Reggie Jackson. An amateur stage actress with Actors' Showcase and patron of the Manitoba arts throughout her life, she was proud to have served on the Royal Manitoba Theatre Centre's Board of Directors.
Turning heads with her style and confidence, she drove convertibles, enjoyed moderately blue humour, and was not averse to betting on the ponies.
In 1961, Vinie married Edward Francis "Ted" Glass (no relation), a union that lasted 32 years until Ted's passing in 1993. She was a loving mother to sons, Ralph, John and Bill; and fun-loving grandmother to Marlo, Ted, Alexandra, Evelyn and Victoria. Vinie will also be deeply missed by her daughters-in-law, Karen Knop, Julia Korsakova and Jennifer Glass; sister-in-law Geraldine Glass; nephews, Michael (Amber), Eric (Cindy), Robert (Trish) and Steve (Dawn) Glass, their families and many extended relatives. Mom and Dad supported all of our adventures and, truly, blessed us with everything we ever needed.
Vigorous and mirthful, Mom was the life of the party, entertaining with ukulele sing-a-longs, magic tricks, bubble makers, flying toys and, most amazing of all, her mastery of the miniature harmonica - hands free.
Vinie was a proud Canadian who loved her life in Manitoba. She was an avid reader and collected a vast number of vintage magazines, from which she curated displays of print advertising at the Western Canada Aviation Museum and elsewhere that highlighted the evolving role of women, the march of technology and other changing social mores through the 20th Century. Retirement also brought a turn to creative writing, including a collection of whimsical short stories and poems published as part of the legendary CBC Radio host Peter Gzowski's Morningside Papers.
Vinie connected with people from all walks of life, enjoying long conversations in her sunroom in Woodhaven. She revelled in hearing of the successes of others, celebrating their achievements big and small and offering encouragement and advice along the way. Mom will be greatly missed by everyone who knew her.
We offer sincere appreciation to the wonderful staff of the Riverview Health Centre, Unit CD3.
In accordance with Mom's wishes, no memorial service will be held.
Friends and family are encouraged to celebrate each new morning and, if desired, to support The Children's Hospital Foundation of Manitoba at https://www.goodbear.ca.