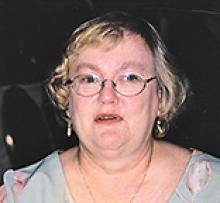 It is with heavy hearts that we let Mom go to be with our Dad on January 12, 2020.
Barbara was born December 29, 1941 in Russell, MB to parents, John and Anne Collins of Roblin, MB. She was their second child and beloved daughter.
Barb and brother Gerald grew up in Roblin and attended Goose Lake Collegiate. She continued her education at the University of Manitoba. She graduated in 1963 from the Faculty of Home Economics and also obtained her teaching degree. In 1967, she married Ronald Manns of Carberry, MB and they began their married life together in Winnipeg. Barb taught until daughter Tricia was born in 1971, and then daughter Nola followed in 1974. She returned to teaching in the 1980s as a substitute teacher in the St. James School Division.
Barb was a wonderful sewer, artist, baker, and cook. She volunteered for many committees and school activities including the annual dance recitals for Karen Luba School of Dance. In the 1990s, she found a passion for porcelain painting. She was very artistic and made many beautiful pieces.
She curled for many years with the various ladies' leagues at the Assiniboine Memorial Curling Club and served more than one term as president. Even in later years and after two knee replacements, she continued to curl. With her new bionic knees, she began curling in both the two person stick league and the regular ladies league. She had many friends from the AMCC and will be missed greatly by them.
In 1996, daughter Tricia married Steve Livingston and Barb gained a son. In 1999, grandson Tyler was born followed by granddaughter Jillian in 2002. Her grandchildren were the world to her and she did everything for them. They called her Nana and so did many of their friends.
Barb and Ron had cottages at Pelican Lake, first at Y Point then later at Cow Point. She will be missed by all her lake friends as well.
Barb is survived by daughters, Tricia and Nola; and grandchildren, Tyler and Jillian; her brother Gerald (Maxine); sisters-in-law, Marjorie Hay and Muriel (Les) Watts. As well as numerous nieces, nephews, extended family and many friends.
She was predeceased by her parents; her beloved husband Ron; son-in-law Steve; and by brothers-in-law, Ken Hay and James Manns.
Barb's Celebration of Life will be held at Chapel Lawn Funeral Home, 4000 Portage Ave., Winnipeg, on Thursday, January 23, 2020 at 2:00 p.m.
The family wished to thank Dr. H. Gooi for his care of mom for many years and the hard working and dedicated staff at St. Boniface Hospital, especially the ACCU and ICMS wards.
In lieu of flowers, donations may be made to the charity of one's choice.