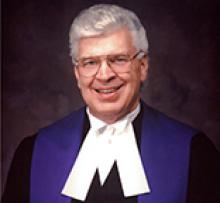 The family of The Honourable Justice Ronald Dean Bell, Uncle Ron, is deeply saddened to announce his passing on January 13, 2020.
He was born in Deloraine, Manitoba on February 12, 1932 and educated in a one room school; he later attended Brandon College, graduating in 1951, and received his law degree from the University of Manitoba in 1955. From 1955 to 1959 he served as a Solicitor for the Department of National Revenue in the Taxation Division. He was associated with and partner of a Calgary law firm Fenerty & Co. from 1959 to 1978. In 1976 he was appointed to Queen's Privy Council. He formed the law firm Bell Felesky Flynn in 1978 with offices in Calgary and Edmonton with practice restricted to taxation matters. In 1991 he was appointed Judge of the Tax Court of Canada. He was one of the most sought-after counsels in taxation matters, wrote extensively for professional journals and lectured across Europe and North America on a specialty within a specialty - taxation as applied to the petroleum industry.
Justice Bell had a long and close association with Brandon University (BU), bringing his extensive legal, professional and personal experiences to his service on many BU boards, and tirelessly promoting BU across the country, while also making significant financial contributions to improve physical structures, programs and student scholarships. A founding member of the BU Foundation, he established both the R. D. Bell Scholarship and the R. D. Bell String Scholarships. He contributed to numerous other scholarships and campaigns, and donated numerous gifts of art. In 1994, he donated and had restored an 1873 square Steinway piano. He was appointed Chancellor from 1990 to 1996 and because of serving with distinction in this role was named Chancellor Emeritus in 1998. He served as an exemplary ambassador and in doing so enriched the depth, stature and student life at Brandon University.
His desire to "make things better" was not restricted to BU. His generous support of many other institutions, art galleries and music organizations throughout the country are just as commendable. The donation he was most proud of was given to the Canada Council for its instrument bank, a violin made by Giovanni Tononi in Bologna, Italy in the 1690s.
His service to Brandon University has been acknowledged with various honours and awards including: the Brandon University Alumni Distinguished Service Award in 1981, the Brandon University Foundation Outstanding Volunteer Fundraiser Award in 1999, the R. D. Bell Hall in the School of Music and the Bell Tower atop the Original Brandon Collage Building named in his honour, the Alumni Award in 2000 for exceptional service to BU and the alumni association, a Brandon University Alumni Wall of Fame recipient in 2002, and an Honorary Doctorate in 2006.
His favourite pastimes covered the spectrum, including sports, music, literature, the visual arts and connecting with a unique and vast circle of friends from many walks of life. He knew how to bring people together and create inspiring social gatherings. He enjoyed playing golf at various clubs throughout the country and abroad. He loved playing the piano and enjoyed taking piano lessons. He was extremely articulate and excelled at arranging thoughts and words. He loved language and enjoyed improving his proficiency in French. He excelled at watercolour painting, drawing, and sketching. His closest friends and family looked forward to his iconic Christmas cards - designed with humour and professionally printed around the central subject of his favourite "sippy": the martini.
He was an inspiration to all who knew him, and his spirit lives on in those who found inspiration, courage and strength in his example. He cared deeply for his friends and family, and was continually cared for and surrounded by them until his last breath.
He was predeceased by his parents, William Harold and Myrtle Irene (Sparrow) Bell and his eldest brother William (and Kay) Bell. He is survived and will be greatly missed by his brother George, lovingly adored by nieces, Susan (Denis) of Quebec City and Alison of Vancouver, (and their mother Joan), his nephews, Brian (Helen) of Victoria, Dean (Patricia) of Deloraine and Grant (Susan) of Calgary; his grandnieces and grandnephews, Catherine, Grace, Olivier, Scott (Lindsay), Anika (Matt), Andrew (Shannon), Britney (Brayden), Jayson (Dani), Graeme and Brynmor, great-grandniece Andersyn, and great-grandnephew Oakland.
A funeral service will be held on Friday, January 24 at 1:00 p.m. at Cropo Funeral Chapel, 1442 Main Street, Winnipeg with Rt. Rev. Msgr. Mitrat Michael J. Buyachok officiating. Interment to follow in Brookside Cemetery, 3001 Notre Dame Avenue.
If friends so desire, memorial donations may be made in memory of Ron Bell to a charity of their choice.