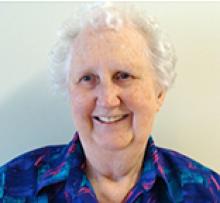 
After a long, productive, and happy life, Edna passed away at age 96 in Middlechurch Home.
She was predeceased by her loving husband, Jack, parents, George Frank and Ethel Jenny Martens, and siblings, Frank, Ethel, Theo and May.
She is sadly missed by her children, John and Darlene; Sheldon and Glenys; and Keith and Catherine. Also left to mourn are grandchildren, Cynthia, Michelle (Dave); Michael and Jaclyn; Scott (Tanya) and Lauren (Shaun) and great-grandchildren, Henry and Liam; Alycia; and James and Anna. Surviving are sister-in-law Kato Ansell and brother-in-law Jim Townsend. Others, including extended family, Peter Bachinsky, Tolv Neuendorff and Bob York, along with many friends and family will miss her.
Edna had a very active life as a mother, teacher, consultant, vice principal and principal (such as at Wayota and Central School, Transcona) and as co-founder of the Manitoba Outdoor Education Association. She also became an Anglican minister (St. Catherine's, St. Stephens, St. Barnabas, St. Anne's, St. Martin's in the Field, St. Paul's Middlechurch, St. Helen's Fairford, St. Cyprian's in Teulon, and chaplain of Transcona Legion and the Mothers' Union). Earlier in their married life, Edna and Jack were very active in the Transcona community as it grew from a town into a city resulting in the street, Edna Perry Way, being dedicated in her honour.
Thanks to the many caring individuals at Middlechurch Home, Devonshire House, and Kildonan House.
Service with reception immediately following is 11:00 a.m. on Monday, January 20 at Transcona Cropo Funeral Chapel, 1800 Day Street, Winnipeg.
In lieu of flowers, donations would be gratefully accepted by the Canadian National Institute for the Blind or charity of your choice.
Edna was a pioneer in education, the community, and the ministry. Her life story is captured in her book, A Prairie Girl's Life, available on Amazon.