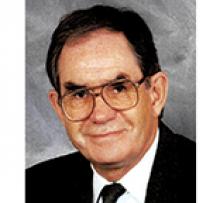 
It is with heavy hearts that the family of Harold Richard Howden announces his passing, after a brief illness, on January 17, 2020, at the age of 87 years.
Harold is survived by his wife, Kathryn (Kate) (nee Mc Dermott), children: John Howden, Kathleen Lebar (Mario) and Elizabeth (Beth) Howden; his grandchildren: Samantha Howden, Sophia Lebar, James Lebar, Fiona Lebar and Keara Howden. Harold was predeceased by his parents, Dr. John Power Howden and Odile Marie Howden (nee Gladu), his four brothers, Dr. Robert Lorimer (Lorie) Howden, John Stuart Howden, James (Jimmy) Howden and Gerald (Gerry) Howden. Harold was also predeceased by his first wife, Lillian Caroline (Carol) Howden (nee O'Leynick) in 1993. While Harold leaves behind an extended family of many in-laws and numerous nieces and nephews, he was particularly fond of his nephew, Dr. Richard Howden, whom he regarded with the affection of a brother. Harold also leaves to mourn his memory many persons from all aspects of his life including those he met during his business career, and, the friends and neighbours from Twin Lakes Beach in St. Laurent with whom he developed lifelong connections that he cherished.
Harold was born on January 25, 1932 as the fifth son in a prominent Norwood family. As a youth, Harold was educated in various St. Boniface schools and he grew up surrounded by the field of medicine as his father JP and brother Lorrie were both respected physicians while his mother Odile was a nurse. After high school, Harold attended the University of Ottawa as he had spent considerable time there in his formative years exploring Parliament Hill with his brother Gerry, while his father served as a Member of Parliament for St. Boniface. After the passing of his mother Odile, Harold chose to leave the University of Ottawa to pursue a brief career in the Royal Canadian Mounted Police. Eventually, after holding a few different jobs, Harold found his true calling, which may have been directed by the early medical influences in his life. Harold considered himself very fortunate to have had the opportunity to pursue a lengthy career in pharmaceutical sales for the company that ultimately became known as Glaxo Smith Kline. While Harold set many sales achievement records and received several awards for his salesmanship (including accolades for his public speaking and salesman of the year), the greatest commendations came from those who knew and worked with him. Through his professional efforts, Harold made many lifelong friends including pharmacists, doctors, and other pharmaceutical sales representatives. Harold always made the time to forge genuine and authentic connections with people, regardless of their station in life, and he was truly good company to be with. Harold was respected and well loved by everyone who knew him. Harold's generosity of spirit, kindness, and love of life were gifts that he shared with those fortunate enough to know him.
Harold's greatest affection in life was his deep and abiding love for his immediate and extended family. Harold was a doting and loving father who took great pride in the accomplishments of his children and he instilled them with the values of hard work, integrity, and consideration for others. While his successful business career afforded Harold and Carol the opportunity to travel several times to Hawaii and the Caribbean, their happy place was Twin Lakes Beach in St. Laurent. The Howdens and their cousins and friends on Twin Beach Road were like one big family and summers at the beach became memorable for the frequent and eventful social gatherings, birthdays, anniversaries, and celebrations. As a notorious storyteller with an exuberant personality, Harold frequently was the life of the party in his younger years.
Harold was very fortunate to meet and marry Kate Mc Dermott in 1997 after the passing of his first wife Carol. Harold and Kate enjoyed many happy years of married life. A significant portion of their happiness was generated by their shared life at the beautiful four-season lakeside home that they built together at Twin Lakes Beach. As Harold aged, he continued to do the things that he enjoyed - including swimming, cycling, and attending social gatherings with small groups of family or friends at the lake. Harold could often be seen driving his vintage 1930 Model A Ford Coupe down Twin Beach Road while his grandchildren sat happily in the rumble seat, knowing that their grandfather would provide them with an ice cream treat as part of the ride.
In his later years, Harold was fortunate to be able to continue enjoying the quality of life that he had previously experienced, largely due to the loving support provided by Kate. Harold was also very fortunate to have benefitted from the support of his dear friend and family physician Dr. P.G. Mehta who made routine visits to the household and checked in on him until the days of his final passing.
Harold's life was full of richness, good fortune, and happy memories. Harold was a man of great faith who touched the hearts and lives of those fortunate to have known him. Harold enjoyed a truly blessed and wonderful life.
The family invites you to celebrate Harold's life with them at a funeral mass, which will be held at Holy Cross Church at 252 Dubuc Street on Monday, January 27, 2020, at 11:00 a.m. Please note that eulogies and opportunities to provide words of remembrance will precede the mass at 10:30 a.m. A luncheon will be served in the church hall immediately after the mass.
In lieu of flowers, the family requests that a donation be made to the Society for Manitobans with Disabilities or to Connect Employment Services which is an agency that provides community-based supports for handicapped persons.


It is with heavy hearts that the family announces the passing of Harold Howden on Friday, January 17, 2020, at the Grace Hospital, at the age of 87 years.
Funeral arrangements are pending, and a longer obituary will follow.