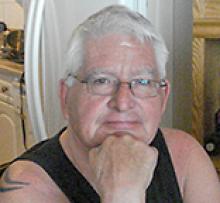 
Don passed away peacefully, on January 8, 2020, at Toronto General Hospital in Toronto, Ontario. He was born on August 18, 1944, in Steinbach, Manitoba.
Predeceased by his brother Alan, and
parents, Wilfrid (Jiggs) and Jessie Blanchette.
Lovingly remembered by his daughter Laela (Matthew), sister Gail and brother Bill. He leaves behind two grandchildren, Jesse and Tyler Bowles. He will be greatly missed by many other relatives and friends.
His greatest pleasure was spending
summers with his family in Traverse Bay at the cottage and Victoria Beach.
He will be interred at Victoria Beach
cemetery, and a celebration of Don's life will be held in August, 2020 (exact date will be
announced closer to the time).