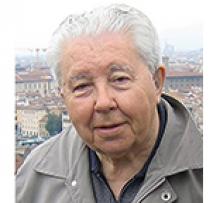 John lived a wonderful life, full of family, travel, and gentle kindness. He was born February 5, 1928 in the town of Leeuwarden, Netherlands. Soccer was a keen life-long interest of his and he avidly followed many sports throughout his life. School was not difficult for him and he had a brilliant mind for numbers.
In 1946, influenced by his father's involvement in the Dutch underground and being impressed by the Canadian military for their liberation of the Netherlands, he enlisted in the Dutch army. He was then stationed in Indonesia where he met a lovely young Indonesian woman named Hok who would become the love of his life.
Once out of the army, John worked in Indonesia as an accountant. In 1957 they headed to Canada with three children in tow and first settled in Winnipeg.
Soon after, he took an accounting position with the Winkler Creamery. A number of years later, when the creamery was sold, he was offered an accounting position with Friesens Corporation in Altona, Manitoba. John held board positions with the Altona Credit Union and Friesens Corporation, and volunteered time with the Altona Housing Authority. He remained at Friesens as VP of Finance until the age of 62 when he retired.
Retirement suited John well. He and Hok immediately moved to Winnipeg. They loved to travel and retirement allowed them to travel as often as they could. When not attending as many Folklorama pavilions as possible during the summer, they travelled to their home countries of Indonesia and the Netherlands and numerous countries in between. A highlight was being able to take his children and grandchildren to Holland, tour the places he was familiar with and tell stories.
John passed away January 16, 2020. He is survived by his loving wife Hok of 71 years; children, Evert (Sonia), Anna (Steve), Paul (Donna), Robert, Irene (Len); grandchildren, David, Laura, Kristi, Kara, Jeff, Andrea, Justin, Nicole, Jenny; as well as 11 great-grandchildren. He was predeceased by one daughter Honey; sister Lamberta; and brothers, Siep and Bert.
A private family Celebration of Life is being planned. He will be greatly missed.
The family would like to thank all the friends and family who sent email condolences, thoughts, and prayers. Each one was very much appreciated.
A special thank you is also extended to the wonderful staff at Lions Manor, 4th floor, Personal Care Home for their kindness and care they gave John these past two years.
In lieu of flowers, please consider making a donation to: Lions Manor Personal Care Home (Recreation Department).