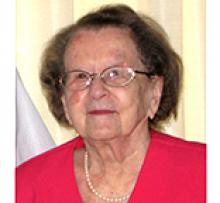 
Died peacefully on January 16, 2020, at Grace Hospital, Winnipeg, at the age of 103.
She will be sadly missed by sons, Richard (Jane) of Ottawa, and Howard (Jane) of Winnipeg; grandchildren, Elizabeth, Tom, Laura, Alex and Tessa; and many nieces; nephews; grandnieces and grandnephews; as well as her remaining siblings, Faith (Bud Stanley), and Richard (Carole) Archer.
She was the daughter of the late Charles and Mary Archer; and was predeceased by her husband Ralph; sisters, Kathy (Romeo Fafard), Helen (Blake Huff), and Doreen (Frank Proctor); and brothers, Hinckley (Mary), John (Alice), and Sam (Elsie).
Born and raised on a homestead near Broadview, Saskatchewan, she married Ralph Ferch of Kipling, Saskatchewan, in December 1938, and they enjoyed 76 years of happy marriage until Ralph's death in 2015. They moved to Fort William, Ontario in 1940, where Ralph worked as a machinist until his retirement in 1977. After the birth of their first son, Lillian became a full-time homemaker. She was a long-time active member of the Westfort Community Association in Fort William. An avid reader with a keen interest in history and current affairs, she encouraged her sons to be readers and critical thinkers as well. Although possessed of strong opinions on many matters, she was very accepting and non-judgmental in her dealings with family and friends. She enjoyed sewing and knitting, and did counted cross-stitch embroidery for many years, until advancing arthritis made it too difficult. Although not particularly keen on sports generally, she became an avid Toronto Blue Jays fan. Ralph and Lillian moved to Winnipeg in 1997 to live with Howard and his family, and Lillian was still living at home there until the day she died.
As per her request, cremation has taken place and a private family service will be held at a later date.