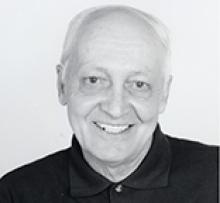 
Peacefully, on January 15, 2020, at the St. Boniface Hospital, Ed Gregora, aged 89, passed away in the presence of his family.
Ed was predeceased by his wife Florence (Yee) in 1979. He was also predeceased by his parents, Walter and Annie (Falta), as well as by his brother, Fred. He is survived by his children, Walter and Ai (Sakamoto) and Walter's children, Brandon and Jamie; Susan and Gordon Pollard and their children, Michael, Jacqueline and Brock; and Grant and Carol (Gee) and their son Owen. He is also survived by his brother-in-law Lloyd Yee, his wife Lorna and their children, Allan, Debbie, Cindy and Darin.
Ed was born in Winnipeg and grew up in the North End. His family lived in several locations in North Winnipeg finally settling in at 351 Henry Ave. Ed attended David Livingstone, Victoria Albert, Hugh John Macdonald and Daniel McIntyre Schools. His childhood friends from this time continued to be his close friends for his entire life. Even after moving his family to Fort Garry he spent countless hours talking on the phone or over coffee with Wally Bard, Mack and Ann Demidiuk, Mike Krawitz, Mike Kachmar and George Derenchuck. He spent many evenings on Boyd Avenue with his longtime friend, Olga Kucher, watching the Lotto 6/49 draws.
Beginning in 1947 Ed started working in the construction industry. He decided to become a certified electrician and apprenticed at Star Electric and Bubb's Electric and then worked at Canadian Comstock. In 1964 he hired on with Transport Canada and he worked at the Winnipeg Airport until his retirement in 1990.
Ed grew up in a musical family - his father played the saxophone, clarinet and violin. Ed's children very fondly remember growing up with parties in the basement of their Somerville Avenue home with a house band made up of family and friends. Ed loved Dixieland and Jazz music and had a huge collection of music that he recorded and downloaded over many decades. He attended many concerts and particularly enjoyed the annual Winnipeg Jazz Festival.
After retiring early Ed had plenty of time and energy to help out with the raising of his grandchildren. He would cheerfully do whatever was needed - babysitting, preparing meals (Eddie's Spaghetti being his trademark dish), attending recitals and driving to baseball, soccer and hockey games. Grandpa Eddie could always be counted on - whether you needed a toonie at the canteen or a kind word after losing a game or a friendly ear on a long distance phone call.
Ed was a sweet, quiet, gracious man. A true gentleman at all times. He never wanted to impose on anyone and was ready to lend a hand to anyone who needed it. He was always respectful of others and had a kind word for everyone. He led a very simple life - living in the same home for 60 years and had little interest in any material possessions. He believed in old fashioned virtues - honesty, hard work, thriftiness, punctuality and opening doors for everyone.
The family would like to give a special thank you to Dr. Slutchuk, Dr. Malik, Dr. Poon and Dr. Book, whose attentiveness and compassion in providing care to Ed enabled him to maintain his independent lifestyle, which was so important to him, right to the very end. In addition, our thanks to Dr. Al Buchel and the team at St. Boniface Hospital for their compassion in Ed's final day.
In lieu of flowers, donations can be made in memory of Ed, to the Cardiac Sciences Program at St. Boniface Hospital Foundation, or to the charity of your choice.
A Celebration of Life will be held for Ed at 10:00 a.m. on Thursday, January 30, 2020 at Thomson "In the Park" Funeral Home.


"The song is ended but the melody lingers on."