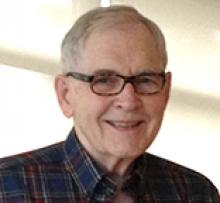 
Ronald (Ron) Abram Thiessen, son of Abram J. Thiessen and Lenora Thiessen and husband to Herta Thiessen, passed away, peacefully in his sleep, at 2:59 a.m. on Sunday, January 12, 2020. He was 83.
He is survived by Herta, his sons, Douglas, Paul and Andrew, his daughter Alyson, and his granddaughters, Athena, Joanna and Rayna.
Born in Winnipeg at Concordia Hospital on July 3, 1936, Ron lived in Rosenfeld, Manitoba for his first 18 years. He always considered it his hometown and remembered it fondly. Growing up he developed a lifelong enthusiasm for sports, especially hockey and baseball, and he cheered for the Montreal Canadiens and the New York Yankees. Talk about picking the winners!
Ron was a loving son, brother, husband, father and grandfather. He took his family on many memorable vacations, loving to fish at Lake of the Woods and ski in the Rockies. Though he took up skiing later in life, he kept it up until in his 70s. Ron also loved music of all kinds, especially hymns, as well as Johnny Cash and Hank Snow.
Ron loved working with and for his father and knew at an early age that he wanted a career in business. He had a long and successful career, beginning as a mechanic and bus driver for Thiessen Bus Lines and eventually becoming an executive with Grey Goose Bus Lines in Winnipeg, followed by periods at Neonex in Red Deer, AB, and President of Grey Goose Corporation (a subsidiary of Laidlaw Group), which he expanded throughout Canada and the United States. In the early 1980s, he was the VP of Laidlaw Canada.
In 1985 he returned to his entrepreneurial roots, beginning with a small distribution company and then Wasteless Environmental Services Inc. with his son Paul. They were an indomitable team and used their knowledge to dominate the industry in Canada and the US.
Ron was a devout Christian and had an active spiritual life. He was active for many years in the Fort Garry Mennonite Brethren (MB) Church as well as River East MB Church in Winnipeg and Lendrum MB Church in Edmonton, where he served on the Board of Stewards and one year as Moderator.
Ron spent the last years of his life in British Columbia, first in a beautiful White Rock condo overlooking the Strait of Georgia, and finally in the Mayfair Personal Care Home in Abbotsford.
Friends and family are invited to pay their respects at a memorial service which will be held at Bakerview MB Church in Abbotsford on February 6, 2020 at 11:00 a.m.