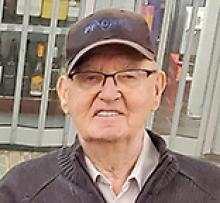 It is with a heavy heart and sadness that we announce the passing of Bob on Friday, January 17, 2020, after a short stay at Grace Hospital in Winnipeg, Manitoba.
Bob's memory will be forever cherished by his wife Reta, of 63 years; son Rick (Wendy) and grandsons, Kevin and Mark; son Glenn and grandson Thomas; son Dean; sister-in-law Lorna Olson; brother-in-law Kenneth (Diane) Olson, as well as many nieces and nephews.
Bob was predeceased by his parents, Mabelle and Roy Rosendahl; sisters, Della (Dan) Witzke and Ireen (Warwick) Blissiett; brother-in-law Donald Olson; sister-in-law Janet Olson, as well as nephews, Joel Olson and Brad Knippel.
Bob was born June 8, 1932, in Turtleford, Saskatchewan to a life on a farm, living in a log house with a dirt floor and hard winters but a loving and supportive family. In 1941, in the pursuit of a better life, the family moved south to Estevan, Saskatchewan where they put down roots and began to build a new future.
Through the guidance of his father Roy a strong work ethic was instilled in Bob at a young age. He joined his father in the carpentry trade and earned his Journeyman Certificate. In 1953 he became a Freemason, a proud member of Estevan Lodge #25, with his Freemason ring being one of his most prized possessions.
Bob met and married his high school sweetheart, Reta, in 1956. They started their own construction company "Rosendahl Woodworks", building it to the point of 35 employees constructing commercial buildings and houses in Estevan and the surrounding area.
In furthering opportunities for his young family, Bob and Reta embarked on a career change to pass on knowledge to others through a pursuit in education. At the age of 35 he returned to school full time earning his Bachelor of Education Degree at UND following that with a Master's Degree from UNI. He taught high school at Estevan Comprehensive School and then moved on to a position as an instructor at Red River Community College in the teacher education program in Winnipeg, Manitoba for 17 years.
With Bob's strong desire to share his knowledge with others, he authored his first book on the many uses of his favourite woodworking tool titled "the Router", first published in 1982 and reprinted 11 times over 20 years. The publishing of the book led him into a new passion of performing instructional and entertaining seminars across North America to many interested woodworkers.
In 1995, at the age of 63, Bob continued this desire to educate and inspire with the start of the TV Series "the Router Workshop". He completed 183 episodes which were broadcast across North America to millions of viewers each week on multiple networks running for 12 years. One of his proudest accomplishments was being able to co-host the show with his son Rick.
In 2003, as he was stepping closer into retirement, he developed a passion for the restoration of his father's first and only new car, a 1921 Model T Ford. This pursuit brought him much enjoyment and fun meeting many enthusiasts at car shows and clubs. He was especially excited to share this passion with his youngest grandson attending local car shows together.
He was always proud of his sons' and grandsons' accomplishments. Bob continued to educate and inspire all those he met and visited with, always with enthusiasm, a smile and a desire to help.
Although we are saddened with his passing, his life taught us that life is a journey filled with opportunities and possibilities, and it is up to each of us to embrace them and pursue our passions.
We invite all to share a memory, a picture or story of how Bob inspired you at https://memories.routerworkshop.com
A private family memorial is being planned.
In lieu of flowers, please consider a donation to a charity of your choice.
Voyage Funeral Home, Winnipeg, Manitoba is assisting the family.