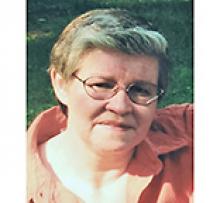 
It is with heavy hearts that we announce the passing of our mother Peggy Sue Manaigre (nee Garrioch), on January 20, 2020, in Palliative Care at St. Boniface Hospital, in Winnipeg, MB, at the age of 60 years.
She is survived by her children, Mona and Lee-Ann (Jason Baines), spouse Clement Manaigre; brothers, Donald Garrioch (Sylvia), Keith Garrioch (Ingrid), Stuart Garrioch (Shari), Allan Garrioch (Ruth); brother-in-law Maurice Manaigre, sister-in-law Rachel St. Pierre (Hector), as well as many nieces, nephews, and extended family.
She was predeceased by her mother Grace Garrioch; sisters-in-law, Margaret Garrioch and Denise Manaigre; and nephew Ryan Garrioch.
Peggy was born on April 1, 1959, in Portage la Prairie, MB, and grew up on a farm near St. Claude, MB. She took great pride in her work at Great West Life prior to becoming a homemaker and raising her family in Winnipeg, MB.
A special thanks to close neighbours who showed great kindness to mom these last few years. Another special thanks to nurse Akta for showing the family such wonderful compassion during Peggy's final hours.
In lieu of flowers, the family asks that you consider a donation to the CancerCare Manitoba Foundation, 1160-675 McDermot Ave., Winnipeg, MB R3E 0V9 or Winnipeg Humane Society, 45 Hurst Way, Winnipeg, MB R3T 0R3.
The interment of her ashes will take place this spring at Green Acres Funeral Home and Cemetery where her mother Grace rests. Make a donation to