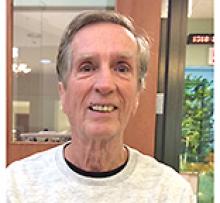 
Peacefully, on January 17, 2020, Bob
Mitchell passed away.
Survived by wife of 54 years, Pat; sons Bob, Ryan and James; daughter Audra (Ron) Schalk; grandsons, Travis and Owen Schalk and Bobby Mitchell; Bobby's mother Diane Hince; sisters, Isabel Mavor, Ann Stone and Andrea Walker; brothers-in-law, James
Walker, Terry Stawychny and Bryan Stawychny; and sister-in-law Yvonne Peters; along with many nieces and nephews, whom he adored.
Dad was born in Montreal, Quebec.
Growing up in Cartierville, he was very
active and rather mischievous (a theme that continued throughout his lifetime). He spent time playing hockey, boating, and was a youth boxing champion. Dad spoke fondly of his days in Montreal, especially when sharing stories about his mother and sisters. Dad's sisters were so important to him and he shared many great times with them over the years.
Dad came to Winnipeg for work and had so much fun (and participated in many antics) with his Canadian Airlines co-workers.
Winnipeg was also where he met mom. Dad instantly became a part of the Stawychny
family and loved the simple life on the farm in Poplarfield. Dad had a special bond with his father-in-law Peter. The "twins" would spend many hours together "making their rounds" and coming back to the farm to sleep it off in the summer kitchen.
Anyone spending time with dad would have experienced his sharp wit and great sense of humour (and likely some teasing). So much laughter was shared in our home, which was usually a result of dad's storytelling or
made-up songs. Some of the things dad loved: music, doing crosswords with mom, golf,
cycling and running marathons. Some of the things dad hated: swearing, fixing things and people who judged other people based on
appearance.
Dad received the most joy from spending time with family, especially with his
grandsons. He was totally dedicated to his children and grandsons in every aspect of their lives. "Cha-Cha" would let Travis, Owen and Bobby do anything (usually involving
water and mud), with Baba assigned the job of cleaning up after them (which she loved and he knew it).
Dad was small in stature but had a mighty personality - he wasn't afraid of anyone
(except mom). He cared about people and he taught us to accept people as they are and treat them with respect, regardless of their appearance, money or status. He never cared about gaining wealth or material possessions; those things were never important to him. To us, dad was the strongest, smartest and
funniest man in the world - he was our hero.
When dad's illness progressed, he found his second family at Actionmarguerite
Saint-Vital. Dad called the staff "his friends" and would often mention how much he loved his room. Words cannot express how thankful we are for the exceptional care dad received during his stay. All of the AMSV staff treated dad with dignity and respect and we would like them to know they made a difference to our family by making dad's journey a positive one.
Dad would not be happy if he thought we were sad about his death. To honour his
memory, please think of the good times you shared with him and spend time doing some of the things he thought were most important in life: being with family, accepting people as they are and using humour as much as
possible (and maybe with a little bit of
teasing).
A private family celebration of life will be held at a later date.