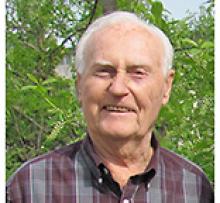 
On January 17, at the age of 92 and after saying goodbye to his very close family, Kurt peacefully passed away. A true gentleman, Kurt was honest, respectful, resilient and incredibly loving. He will be remembered as a generous, fun and active husband, father and grandfather.
Kurt was born in a small German community in Romania in 1927 and moved to Winnipeg at the age of three. He had many stories of his adventures growing up in the early days of Charleswood. Swimming across the Assiniboine River to get ice cream, bringing the newspapers from his route to school to avoid spending hours on his bike and working at the family farm and bee-keeping operations are some of the memories he shared.
A Commerce grad from the University of Manitoba, Kurt spent most of his working life at Oswald Decorating, first with his father, then with each of his sons. He was fair, concerned and well respected in any business dealing, whether as an employer, partner or landlord.
Together with Ruth, he raised two boys, curled, golfed, travelled to Europe, Mexico, Hawaii, Florida, and extensively across Canada. Later in life, Kurt and his golfing buddies joined Bel Acres and also golfed at courses across the province. Lake life began at Twin Beaches, then Caddy Lake, and finally clearing brush and building a cottage with his son, Jim at Lake of the Woods. Each of his grandchildren was given the gift of "Pampa Days", where they were treated to trips to the zoo, Easter egg hunts, picking up eggs at the colony and most importantly, Velveeta cheese and Macaroon Madness. He was proud of everything his grandchildren attempted and he never missed a basketball, hockey or soccer game, a cross country race or track meet, or a piano or dance recital.
Kurt was predeceased by his son Kevin, his wife Ruth, his sister Winnie; and brothers-in-law, Rod, Hugh and Stan. He will be missed but always remembered by his son Jim (Lizann); his grandchildren, Karen (Elliott), Sara and Erich; his sisters, Millie and Rita (Ron); his sister-in-law Susan, and numerous nieces and nephews.
Thank you to the amazing staff on the fifth floor at St. Boniface Hospital, particularly to Rebecca, Amber, Maria and Nicole who made Kurt's last days safe and dignified. Thank you also to Dr. David Breckman, and to Nicole whose concern for Kurt over the past years has been overwhelming.
In accordance with Kurt's wishes, there will be a private family celebration of Kurt's life at his favourite steakhouse.

"When through that one man,
a little more love and goodness
A little more light and truth
comes into the world
Then that man's life has had meaning."