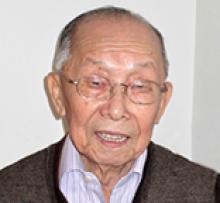 
Teiji Ted Koizumi, at the age of 97, passed away peacefully at Victoria Hospital on Monday, January 13, 2020.
Left to cherish his memory are his brother Bob; sister-in-law Emiko; and many nephews, nieces, cousins and longtime friends. Ted is predeceased by his parents, Yojiro and Take; his older brother Riichi; sister-in-law Reiko; and niece Eileen Koizumi Swanson.
Ted was born in Claxton Cannery, BC, in 1922.
Due to Ted's father's passing in 1938, Ted, at the age of 16, took over the family business in chicken farming, eggs and strawberries as livelihood until 1942.
In 1942 the family was evacuated from their home due to the War Measures Act and was resettled in Balmoral, Manitoba.
In 1946 the family moved to Emerson and started share cropping sugar beets with his brothers.
He enjoyed working on a private yacht as helmsman for the owner of Great Lakes Lumber and Shipping in Fort William / Thunder Bay. Ted travelled all the Great Lakes and Atlantic Ocean to New York, Florida and islands around Nassau Bahama from 1950 to 1954. He then worked for Marathon Pulp and Paper Company up in Caramat, Ontario, installing kitchen cabinets for homes. During the 1970s in Winnipeg he supervised for ten years making store fixtures for Metropolitan and Saan stores and from 1980 to 1990 worked for Winnipeg Supply.
After retirement in 1990, Ted enjoyed golfing, curling and being a member of Horizon Club at Japanese Cultural Centre.
Ted was a devout Jodo Shinshu Buddhist since 1954. Ted played an active role in the Manitoba Buddhist Temple. He gave freely of his time and talents by doing all maintenance work, landscaping, carpentry work – build ing the podium, all the banquet tables and the homyo stand.
Special thanks to Dr. J. Russen, Dr. R. Kroeker, Minamide family, Kusano family and Nishibata family.
A Celebration of Life service is planned for 4:00 p.m. on Friday, January 31, 2020, at the Manitoba Buddhist Temple, 39 Tecumseh Street, Winnipeg, MB.
Parking will be available across the street from the Temple in the Health Sciences Centre lot called Lot T – use any vacant spot.
In lieu of flowers, donations can be made to Manitoba Buddhist Temple, 39 Tecumseh Street, Winnipeg, MB, R3E 0J8.
Interment will be held at a later date.