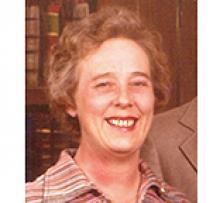 
Shirley passed away peacefully on January 23, 2020, at the age of 88. Born in Selkirk, MB, July 13, 1931, only daughter of Thorkell and Marjorie Johnson who predeceased her in 1989 and 1996 respectively.
Shirley lived, and was employed in Winnipeg for 39 years. She worked for a lawyer/real estate firm from 1950 to 1952. In 1952 she was employed by John Deere until December, 1970. In 1971 she gained employment with MB Bridge and Engineering Works, which was later taken over by Dominion Bridge. She retired in 1987 but continued to work part-time until 1989.
Shirley married Watson Stevenson in 1976, whom she worked with. In 1991 she and her husband moved to her family home in Selkirk to be close to and of assistance to her mother who resided at Betel Home in Selkirk.
They returned to Winnipeg in 2002 because of Watson's illness. Watson passed away on August 9, 2003.
She leaves to mourn her stepchildren, Barbara (Gordon) Bowen, Laurie (Wayne) Pawlett, Elizabeth Stevenson, DVM, and her grandchildren and great-grandchildren. She also leaves behind many cousins, including Barbara Gessner, Lori (Raymond) Czayka and Karen (Norm) Davies and their families.
Funeral services will be held on Wednesday, January 29 at 2:00 p.m. in the Evangelical Lutheran Church of Selkirk, 329 Clandeboye Avenue. Viewing will be held prior to the service in the Gilbart Funeral Home, 309 Eveline St., Selkirk at 1:00 p.m. Interment will follow at the Selkirk Lutheran Cemetery.
The family would like to extend their heartfelt thanks to the caring staff at the Luther Home where she resided in her final months.
In lieu of flowers, donations may be made in Shirley's memory to Selkirk Evangelical Lutheran Church, 329 Clandeboye Ave., Selkirk, MB R1A 0X4.