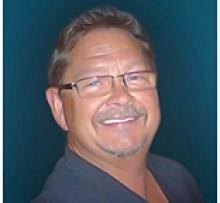 
It is with bitter sorrow that we announce the untimely passing of Kevin Sanderson, 58, after a long brave battle with stage four prostate cancer. It was a battle he knew he couldn't win, but he fought until the end to stay with us as long as he could.
He will be forever missed by his wife and best friend of 40 years, Lori-Lyn; and beloved sons, Tyler (Kelsey) and Tanner. Granddaughter Kimber Lynn brought much joy and love into his life since her birth in February, 2019. He also loved his little dog, Chili.
Also mourning Kevin is his mother-in-law Pat Ashcroft; sister-in-law Jodi Handoga (Ron); nieces, Leigh (Austin) and Lauryn. He was predeceased by parents, Jean and Sandy; and father-in-law Grant.
Kevin was first and foremost a family man. He would do anything for his family and could do anything he put his mind to, including working on cars and renovating his house and cabin. These skills have been passed on to his sons to last them a lifetime. He was never happier than when spending time with his wife and boys at their cherished cabin at Beaver Creek, or going on family road trips to B.C and Florida. After the boys were grown, he and Lori went on many winter vacations, finally finding their special place in Kona, Hawaii. Kevin loved cars and trucks and owned many throughout his life, including classic cars, usually of the Chevy variety. He also had fun over the years driving dirt bikes, ATVs, Victory and Harley motorcycles, snowmobiles and Seadoos.
Kevin worked successfully for the City of Winnipeg for almost 30 years as a storekeeper in Public Works, retiring in February of 2015. His great sense of humour and outgoing personality gained him a multitude of friends at work and elsewhere. He was well known for his descriptive stories, punctuated by hand gestures and sound effects. A day didn't go by without one of these friends contacting him by text or phone to cheer him while he was sick and we are so grateful to all of you! A big thanks also for the love and support of family members.
Cancer is a terrible disease but it was made bearable by many. Huge thanks to Dr. P. Czaykowski and nurse Denise at CancerCare Manitoba who helped us fight for two and one half years. When they could do no more, we had a terrific palliative care home team and then the best in care and compassion at St. Boniface Palliative Care. We are very lucky to have these services here, so in lieu of flowers please make a donation to CancerCare Manitoba or Palliative Manitoba.
Cremation has taken place and a celebration of life will be held in the spring.

ALWAYS IN OUR HEARTS