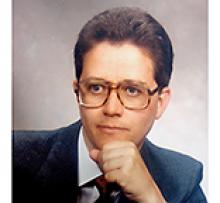 Heinz Dyck died peacefully on January 25, 2020, after suffering a life-ending accident on January 14 from which he never regained consciousness.
Left to mourn his passing are his mother Margaret, his younger siblings, Frank (Anne-Marie), Paul (Kathy), Bruno (Heather) and Rita (Ernie), their families, and many cousins, aunts and uncles. He was predeceased by his father Jacob in 1999.
Heinz was born on April 7, 1951, in Winnipeg. He brought much happiness to his family, and had many gifts, especially in music and the sciences. As a youth he loved piano and was part of a brass ensemble with his brothers that played at church events. He earned top honours in high school and graduated with a Bachelor of Science in Electrical Engineering from the University of Manitoba, and always enjoyed sharing tips with other engineering students, especially his nephews and niece. He went wilderness camping and enjoyed sports, particularly football, hockey and curling.
Heinz was baptized on May 25, 1969, in the Springfield Heights Mennonite Church, where he had been involved in the youth group and taught Sunday School for several years. He was diagnosed with schizophrenia in the early 1970s, and this had an effect on his life going forward, which was remarkably successful on many counts. It is striking how well he embodied the Fruits of the Spirit: love, joy, peace, patience, kindness, goodness, faithfulness, gentleness and self-control. Heinz was a kind and gentle soul; he did no harm. He was selfless and undemanding; he didn't want anyone to go out of their way for him. He'd rather show up much earlier for an appointment than have anyone wait for him. He was a truly good oldest brother and cared for others as best he could. He was frugal to a fault, content to live beneath his means, and happy to live on his own.
We celebrate his newfound freedom from all that hindered him on earth, for now he is a new creation....in Christ, the new creation has come: The old has gone, the new is here!
Heinz benefitted from excellent medical care from professionals like Dr. Eleff and the outstanding care he received at Health Science Centre after his accident.
Funeral services will be held at 11:00 a.m. at Douglas Mennonite Church, 1517 Rothesay Street, Winnipeg, on Tuesday, January 28, 2020.
In lieu of flowers, donations may be given to Mennonite Central Committee.