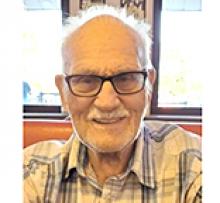 It is with great sadness and broken hearts that we announce the passing of Norman Nevraumont, at Selkirk Regional Hospital, at the age of 87.
Predeceased by his loving wife Doreen, parents, Julien and Germaine, infant sister Carmen, and his brother Louis.
Left to cherish his memory are his children, Karen (Brent), Brenda (Rick) and Wayne (Laura), grandchildren, Steven (Meghan), Michael, Christopher (Kari), Jason (Stephanie), Lindsay (Mario) and Chelsea (Chris), great-grandchildren, Sora, Abbi, Bryson, Izaak, Brianna, Peyton, Harper and Wrigley, his two sisters, Angie Bouch and Irene Lacoste, and his four nephews and their families.
Norm was born and raised in Pipestone, MB until his parents moved the family to Winnipeg, when he was a young boy. He started working at the City of Winnipeg at the age of 17 until his retirement in 1988, after 38 years of service, at the age of 55.
Dad was a devoted and loving husband, father, and friend who was always there when he was needed.
We would like to express special thanks to Carol and the health care angels of Kin Place and Springfield Place, and special thanks to the doctors and nurses of the Palliative Care Ward at Selkirk Regional Hospital during his final days.
A memorial service for Norman will be held at 2:00 p.m. on Saturday, February 1, 2020, at Green Acres Funeral Home, Highway 1 East at Navin Road.