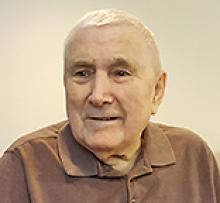 Mitchell Brisky was born in Winnipeg, MB, on March 2, 1925, to Peter and Mary Brisky, the oldest of three children.
He is survived by his loving wife of 67 years, Joyce; three sons, Kenneth (Lois), Richard, Curtis (Diane); two grandsons, Kevin (Jaclyn), Michael (Alla); and five great-grandchildren. He is also survived by his brother, Edward. He was predeceased by his sister, Anne.
Mike was a content person who generally did not initiate change. A testimony to this is the fact that over a span of almost 85 years he lived in the North End, mainly in two houses, next door to each other on Anderson Avenue. He received his schooling at Ralph Brown Elementary, and St. John's High School.
A highlight of his life was the opportunity to serve in the Royal Canadian Navy during the Second World War. This included time on the minesweeper H.M.C.S. Sarnia. Here he met other servicemen who would become life-long friends, connecting with them in subsequent years at reunions and through personal visits.
In March of 1952, Mike married Joyce Dirr. He had begun his career as a meat cutter at Swifts Meat Processing Plant. This he did until company changes forced retirement in December of 1979. Mike took it as an opportunity to switch gears, taking up golf, his claim to fame being a hole in one on the second hole at the Kildonan Golf Course. He and Joyce acquired a trailer at Falcon Lake, which made for much socializing, creating memories which the family still reminisces about today.
His love of sports frequently found him watching a game on TV, with a radio beside him, listening to a second event, his own unique take on multitasking. A regular pastime was connecting with the same group of friends, monthly, for a rousing game of Rummoli. Mike loved playing cards and wasn't opposed to tossing in a few coins, just to keep it interesting.
He and Joyce frequently travelled with family and friends to various places, including Florida, Arizona, California, Mexico and Hawaii.
He enjoyed the deck in the back yard, keeping up with the neighbours, and made sure the bird feeder was always full, as he and Joyce both enjoyed watching the activity around it. Being a jack of all trades, he took on projects at home, inside and out, his work reflecting attention to detail and a certain 'know how'.
His residence for the last 10 years was the Maples Personal Care Home, where he was not only cared for, but also cared about. The family sincerely thanks the staff at Maples for their consistent devotion and care.
After a long goodbye, the circle of Mike's earthly life closed on January 23, 2020.
In keeping with the family's wishes, no formal service was held.