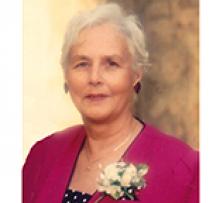 
Gloria Anonsen (nee O'Hanlon) peacefully passed on January 23, 2020. Mom was born September 3, 1926, in Calgary.
Predeceased by her husband, Erik; and sisters, Amy and Gertrude. She is survived by children, Victor (Cathie), Richard (LynnAnn), Frances (Dan), Kathy (Bruce), David (Sandy); grandchildren, Kelsey, Austin, Erik, Mitchell, Colton, Torrin, Nina, Ann and Eric.
Mom started her career working in the Holy Cross Catholic Hospital in Calgary. She had a number of roles there in the administration. While working there she was introduced to her future husband by her sister Amy. After a courtship, Mom succumbed to Dad's charm, and they were married in August 1953.
Having a husband in the Air Force meant Mom moved a fair number of times. She lived in Gimli, MB, Moose Jaw, SK, Marville France, Saskatoon, SK, Chicoutimi, QC, Winnipeg, MB, Terrace, BC, Richmond, BC, Guinea, and finally retired to Abbotsford, BC.
Mom was a bookkeeper by trade, so she managed the family finances. After getting the kids all organized and old enough to look after themselves, Mom went back to work at local law offices and furriers in downtown Winnipeg. Often, she would bring home Laura Secord treats from Winnipeg Square. When Dad worked in Sioux Lookout, she would often drive there on the weekends to see him, leaving whoever was left at home to fend for themselves. She would go from Friday to Sunday, all the while travelling in the luxury of a 1977 Lincoln Continental.
While in Richmond, Mom was working part time with Weight Watchers as a way to get out of the house. She moved a lot with Dad as an Air Force wife, as Dad was posted in different bases in Canada and abroad. They travelled widely. They saw parts of Europe when stationed overseas. They went on a few trips to Hawaii, and she lived with Dad in Guinea on the African coast, while he was working there on a preretirement contract. A bit of a snowbird, she spent her early retirement with Dad taking the trailer to the South West US (Yuma, Arizona). They managed to get away to Winnipeg and Toronto on occasion, and also to Vancouver Island.
After the trailer was sold, Mom and Dad were big fans of local Abbotsford eateries, such as the White Spot and IHOP. She loved her Murdoch Mysteries and Mash reruns, among other things. In her later years, Mom also became a sports fan, watching hockey and football whenever the mood struck her.
She has reunited with Dad, and they are probably listening to some Mozart or Beethoven, sharing a steak and a nice glass of wine, and watching over the family.
Thank you to the staff at Shaftesbury Park for their support and care while Mom was there, and thank you to the staff at Deer Lodge 6th floor, who cared for Mom at the end.
Cremation has taken place, and a private family service will be held at a later date.