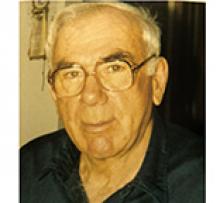 Edward Stefanuk passed away on January 26, 2020, at the age of 92, at Goodwin Lodge in Teulon.
Ed was born on May 14, 1927, at Teulon, MB.
He is survived by his wife Rita (nee Carter), of 68 years; his son Joe (Judy) Stefanuk; grandchildren, Sherry (Jason) Genick, Lenore (Darcy Moore), Tammi (James Cameron); and six great-grandchildren, Destiny and Branden Genick, Veta Moore, Tanner, Curtis and Cooper Cameron; as well as nephew Joseph (Trish) Wedge and family; and many other nieces, nephews and cousins. Ed was predeceased by his parents, Mike and Mary (Moscall) Stefanuk; and sister Phyllis (Joseph) Wedge.
Ed farmed all his life in Armistice, SD, and worked part time as bartender at the Viking Hotel in Gimli, and Petersfield and Teulon Hotels. Ed liked his John Deere equipment, enjoyed playing violin, as well as baking bread and ginger snap cookies, and having coffee with neighbours. Ed spent many hours working on his tractors alongside his son, Joe, who often got to hear a lot of cursing, but Ed would always go out of his way to help Joe, whom he loved dearly. Ed thought the world of his grandchildren, and would bake with them, take them for treats and ride alongs on his tractors, and just loved spending time with them and joking around.
Due to ill health, he spent his last years at Goodwin Lodge. The family would like to thank all the doctors, nurses and staff at Goodwin Lodge for the compassionate care Ed received.
As per Ed's wishes, cremation has taken place and there will be no service. A private family interment of ashes will take place at St. Williams Cemetery at a later date.
In lieu of flowers, donations can be made to Goodwin Lodge Personal Care Home, Box 89, Teulon, MB R0C 3B0.
Thank you to Ken Loehmer Funeral Services Teulon, for their support during this difficult time.