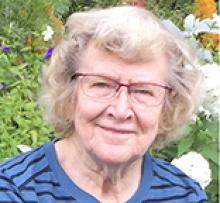 Peacefully on Friday, January 17, 2020, at "noon day bright", Mary Tamara (Doerksen) Giesbrecht's wish that "Jesus come take her home" was fulfilled.
Manja - as she was fondly known - will be greatly missed by her brother Walter; her children, Edith and Ossama, Harry and Elke, Val, Louise and Gary; her grandchildren, Anna, Hassan, Sarah and Emmanuel, Lara and Ryan, Shayna and Mark, Jeremy and Robin, Michael and Caitlin, and her great-grandchildren, Henry, Bennett, Misha, Hayley, Avery and Lenaya. Manja's beloved family stretches around the world with her devoted nieces and nephews and her large faith community. She was predeceased by her parents, Henry and Maria Doerksen, and her husband of 62 years - Harry.
Our mother was born in Pigeon Lake, Manitoba. She and her brother, Walter, were the love of their parent's lives and they grew up surrounded by adoring uncles and aunts for whom the Doerksen farmstead was central.
Music, poetry and love for animals and nature were her greatest influences. Evenings, the sound of Mom at the piano, her father playing mandolin or violin and her mother singing were a constant, even after hard days of work in the fields. Favourite times were spent with her Schroeder cousins and with them too, singing was an important aspect of their lives.
At an early age Mom recognized a desire and need for God in her life. She often recounted the scene of kneeling in the garden with her mother to invite Jesus into her life amidst the beauty of nature, the fragrance of the earth and flowers.
Following the Second World War the Doerksen family sponsored a family of refugees from Ukraine to Canada, and this is how she met her Harry.
Upon meeting Harry, Manja was immediately taken with what she saw as his European gentility, and though she always claimed she didn't pursue him, she knew she had caught his eye and his visits to the family farm became much more frequent.
Their ensuing romance led to marriage in 1952 and the new couple moved to Winnipeg soon after.
Mom worked tirelessly at raising three children and creating a home in St. James so Dad could study and work. As Dad's business became successful and her children grew older, Mom was able to study Russian and German at the University of Manitoba. She was a life-long learner, always curious and willing to learn.
Mom continued work at home, allowing Dad to start a successful construction company. She was given the opportunity to travel and this created a desire for a closer connection to family history. Mom and Dad travelled to the former Soviet Union and formed connections with many relatives who had been lost to them through the war. While Mom relished these times, her greatest joy was to be at home in her garden.
In 1976, as his labour of love to Mom, Dad built the family home along the Assiniboine River in Charleswood. The garden, patio, trees and backyard BBQs became a staple for the ever-growing family.
If not in the garden with her brother, Mom spent her later years with her children, grand and great-grandkids - celebrating birthdays, graduations, accomplishments and holidays - especially Christmas. She loved decorating every year - especially her pièce de résistance, her Christmas tree.
There wasn't a corner that was not touched by Christmas décor and even this past December Mom's tree was up and beautifully decorated.
Her Harry passed away in November 2014 and Mom found solace in the love of her dear brother, her family and her music. Late at night, through tears, she could be seen at the piano playing through her sorrow.
This past year was hard for Mom as congestive heart failure robbed her of energy. Still, she found joy in reflecting on a lifetime of memories and in continuing to watch her ever-expanding family.
In December, Mom was admitted to the Grace Hospital and she knew her time was near. It allowed her to say goodbye to her loving family and numerous friends. We spent every day of the holiday season huddled around her bed - talking, sharing jokes, stories and lots of memories and laughter. To those she wasn't able to say goodbye to she had a message...
"Tell my family how grateful I am. Tell my church family, tell them how much I love them. Tell them how grateful I am for Jesus. Oh my heart is so full - if only you could see how full of gratitude it is."
A Celebration of Life will take place at 11:00 a.m. on Wednesday, February 5, 2020, at Portage Avenue Church, 1420 Portage Avenue, Winnipeg.
If friends so desire, in lieu of flowers, donations may be made to Mennonite Central Committee.