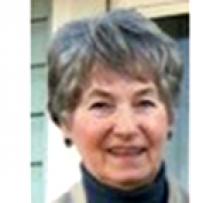 
After living a healthy and active life, Lea Baldwin, passed away peacefully on January 23, 2020, at the age of 85.
Lea's memory will be cherished and lovingly remembered by her four children: Leanne (Randy), Blair, Gayne (Vicki) and Craig (Chantal), as well as 10 grandchildren, and nine great-grandchildren. She was predeceased by her husband Russell (2012), her beloved son Mitchell (1971), and Donna (Blair), daughter-in-law (2017).
Lea was born in Brunkild, MB on March 11, 1934 to Gustav and Lena Hein. She married Russell in 1951 and spent most of their lives farming and living near Starbuck and then later in the Elm Creek area. Lea enjoyed keeping a beautiful home and garden. She had many interests such as birding, art, fashion, and architecture. Later in life she took up golfing and always looked forward to seeing her friends at the Carman Golf Club. Her heart was in flowers and gardening and with this, she involved herself with the Manitoba Horticulture Association. Every summer she would look forward to the garden and home tours and make certain that this was on her schedule. Keeping up with some of her old neighbours and friends from Starbuck through the years was also important. Lea enjoyed a good conversation with her grandchildren, family, or friends. She had a remarkable memory and was very proud to be able to keep up with what was happening in the world around her. She will be sadly missed by her family and friends.
A private family memorial will be planned later in spring at the Starbuck Cemetery. Neil Bardal Funeral Centre, 3030 Notre Dame Ave., Winnipeg, MB in care of arrangements.
In lieu of flowers, donations may be made to the St. Boniface Hospital Foundation.