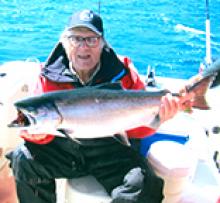 Charles Eber Douglas died in the early morning of Friday, January 10, 2020, at the age of 92.
"Charlie" is survived by his two daughters, Lori and Terri, grandson Stewart, sister Jean Bedford, brother-in-law John Platt (Viola), several cousins, three nephews, two nieces, and many friends. He was predeceased by his parents, Arthur and Freeda Douglas, son-in-law Jack King, brother-in-law Gerald Bedford, many cousins and friends.
Charlie was born and spent his youth in the village of Mather, Manitoba, near the farm where his mother was raised and where his father, a veteran of the First World War, earned a living as a blacksmith. From an early age, Charlie was taught to fish and hunt and these remained throughout his life his favourite pastimes. Although he moved at the age of 18 to Winnipeg to attend university and to pursue a career in education, the people in the Mather district remained very important to him. He continued, often accompanied by his father and friends, to return to the area to hunt.
Charlie had a long and distinguished teaching career which began in the early 1950s at Salisbury Junior High. In September, 1959 he became the principal at Neil Campbell Elementary School where he stayed for the bulk of his career. He earned a well-respected reputation as a principal. Many of the staff members remained close friends throughout his life. Former students have told us they look back fondly on the years they spent at "Neil Campbell". In the last two years of his teaching career, Charlie was asked to return to Miles Macdonell Collegiate as principal and in this position he finalized his lengthy career.
In his youth, Charlie was a competitive baseball player playing first base for the Mather team. Throughout his adult life Charlie was a very competitive curler, participating several times in provincial play downs. The members of the teams he skipped were comprised of very close, longtime friends and family members.
In the late 1980s, while on a fishing trip in Northern Ontario, Charlie was hit by a train. It appeared that he was going to lose his left leg, but, after being flown to Winnipeg, the leg was saved. Those present in the emergency room that day knew he was going to be 'okay' when, being asked by the attending doctor if he was allergic to anything, he replied, 'yes, trains!' That sense of wry humour was a well-known characteristic of Charlie's. For the better part of the next 30 years, Charlie was able to continue to pursue the hunting and fishing trips that were a major source of pleasure in his life, including a number of trips to British Columbia to fish for salmon. His most cherished place to be was the cabin he and his father built on the shores of Rock Lake, near Mather. He was more than delighted to teach his grandson how to fish and to shoot at the cabin.
We would be remiss were we not to observe that Charlie could be opinionated at times and stubborn. In the last several years, his enjoyment of life diminished as he faced issues with his leg, injured so many years earlier and other health problems which inevitably appear with age. He missed the family and friends who had predeceased him and in his last year the home and cabin to which he could not return to or visit. He most definitely appreciated each and every visit from the family and friends who took the time in their busy lives to visit with him. How he loved to converse and reminisce! We will definitely miss him.
According to Charlie's wishes cremation has taken place and interment will follow at a later date at the Mather cemetery.