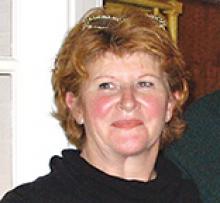 
Carol died peacefully, in Toronto, on January 22, 2020, after a brief illness.
Memories of her tremendous sense of humour, fierce independence and limitless creativity will be cherished by her sons, Jason Epstein (and granddog Max) and Jonathan Beardsley and his partner Alanna Pierce, and the many friends her full life touched.
Born in Winnipeg, Manitoba on November 14, 1949, Carol was the only child of Ruby Elsie Beardsley (nee Theodore) and Oswald Kent Beardsley. She grew up in her family's bakery on Notre Dame Avenue in the 1950s and 1960s, from which she inherited a lifelong talent with butter, sugar and flour. Carol worked for The Bay until the late 1980s when she went back to school to become a teacher. She worked in the Winnipeg School Division from then on - a job that eventually took her to China in the late 2000s. Upon her return, she worked out of Villa Rosa and MATC until her retirement in 2019. Carol's love for her city's arts community was evident through her longstanding volunteer work with MTC, the WSO, the Manitoba Opera and the Fringe Festival. Her zest for life was inspiring - it would be quicker to list the things she did not do, but numbered among her many hobbies were golf, bridge, cooking, sewing, travelling and a recently discovered love of Mahjong.
Thank you to the team at St. Michael's Hospital for the excellent care she received.
Cremation has taken place and a Celebration of Life will be held at a later date.
In lieu of flowers, memorial donations can be made to the Winnipeg Humane Society to celebrate her love of animals (though she did not trust birds).