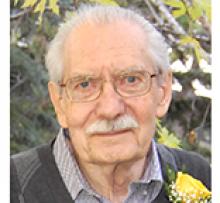 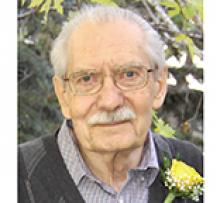 On January 30, 2020, with family by his side, Ira passed peacefully into the presence of his Lord and Saviour.
He is survived by his wife of 68 years, Eleanor; sons, Don (Marlene) and Rod (Beth), and daughter June (Max) Hart, nine grandchildren and nine great-grandchildren. Ira is also survived by his brother Ted (Sharon), sister Helen (Rudy) Schmidt, and numerous nieces and nephews.
Ira was predeceased by his parents, three sisters, three brothers and great-grandson Matthew.
Dad was born February 9, 1928 in Morden, MB, the fourth of nine children born to John and Kathrina Enns. His early years were spent in various small, rural southern Manitoba communities where his father taught in one room schools. Dad would often comment that he and his siblings made up a big portion of the student body. The family eventually settled on a small farm in the rural municipality of Elm Creek.
After high school in the late 1940s, Dad moved to Winnipeg where he held jobs at Eaton's and Paulin Chambers. His interest in things electrical led him to take up an apprenticeship with Janzen Electric, obtaining his Journeyman Electrical license in July 1957. Later in his career he was an estimator at Raber Electric and eventually started his own business, Enns Electric. Dad retired in 1998 to enjoy time with his family, puttering in his gardens, and spending weekends at St. Malo. Many mornings would find him solving crosswords and Cryptoquotes in the Winnipeg Free Press.
In 1950 Dad met the love of his life, Eleanor Mutcher, and they were married October 20, 1951. Together they raised three children who in turn blessed them with nine grandchildren: Tanna (Daniel), Michael (Alessandra), Tracy, Derek (Ashley), Allison (Michael), Nathan, Justin (fiancée Katelyn), Jenna and Joel (fiancée Ashley). The blessings continued with nine great-grandchildren: Lauren, Sara, Edward, Peggy, Ben, Adam, Kayla, Aubrey, Brooke and the soon expected arrival of a 10th great-grandchild.
The years of raising three children were filled with trips to Morden and Elm Creek to visit grandparents, aunts, uncles and cousins. Road trips to the Black Hills and Yellowstone Park were a highlight along with many unforgettable camping trips to Blue Lake.
Dad was a faithful member of Waverley Church, formerly Portage Avenue Baptist Church, serving as a deacon, operating the sound system, participating on the building committee and other ministries of the church where he felt called to serve. Because of his love for music and singing he sang in the church choir where he found even more joy participating in many Christmas and Easter cantatas. Being involved in the Waverley Seniors group gave him opportunities to go on outings and events with church friends.
In their 68 years of marriage Mom and Dad had the privilege to attend and share in many family milestones and celebrations. Dad was a quiet person and had a very kind, gentle and loving heart. Many Sunday evenings were spent at family get-togethers where he would watch with amusement as his grandchildren and later his great-grandchildren played.
A special thank you to home care for the support and care Dad received from Angela, Menasie, Gheorghe, Hammed, Richard, Lisa and Melanie. We would also like to thank the staff at Oakview Place for the wonderful care and compassion shown Dad during the last two weeks of his life.
Viewing will take place on Friday, February 7, 2020, from 7:00 p.m. to 8:00 p.m. at Friends Funeral Service, 2146 Main Street, Winnipeg.
A celebration of Dad's life will be held on Saturday, February 8, 2020, at 11:00 a.m. at Waverley Church, 2171 Waverley Street, Winnipeg with viewing prior to the service. Interment in Chapel Lawn Memorial Gardens.
If family and friends so desire, donations may be made to Wycliffe Bible Translators.

On January 30, 2020, Ira passed peacefully into the presence of his Lord and Saviour, with family by his side.
He is survived by his wife of 68 years, Eleanor, sons, Don (Marlene), Rod (Beth) and daughter June (Max) Hart, nine grand-children and nine great-grandchildren. Ira is also survived by his brother Ted (Sharon), sister Helen (Rudy) Schmidt, and numerous nieces and nephews.
Ira was predeceased by his parents, three sisters, three brothers and great-grandson Matthew.
Longer obituary to follow in Wednesday's paper.