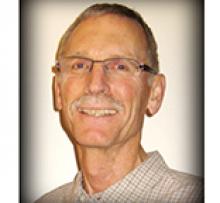 Colin William Hardy, the beloved husband of Brenda Grace Hardy, took his last breath on Sunday, January 26, 2020, with family by his side.
He was predeceased by his parents, William and Anne Hardy (nee Kristalovich), and in-laws, Alfred and Grace Hackenschmidt. Colin is survived by his best friend and wife, Brenda Grace Hardy, his brother Larry Hardy (Marnie), sisters-in-law, MaryAnne Hardy and Beverley Smith, nieces and nephews, Lara Hardy (Owen, Liam), Michael Hardy (Jennifer - Julia, Wesley), Ryan Smith (Finn), plus many cousins and friends.
Colin was born on May 21, 1948, in Vancouver, BC. After his brother Larry was born in 1949 the family moved east to Winnipeg. With his dad in the military, the family moved from Ft. Osborne to Shilo and back to Winnipeg.
Colin started working at an early age - Free Press carrier, after school at Safeway, 30 years at WG McMahon Ltd., 15 years at Our Lady Of Perpetual Help Church (OLPH) and lastly two years at Assiniboine Community College in Brandon. He took great pride in everything he did. He was an honest, reliable, loyal and generous employee. He was never boastful or arrogant - rather giving credit to others instead of himself. So many people who knew and met him, remarked how much they loved him and how genuine and kind he was.
He loved most sports, but baseball was his first love. He loved playing but after an injury decided to coach and umpire. He was able to participate at the 1997 Pan Am games. His team was the New York Yankees and he realized his dream of attending a game at Yankee Stadium in New York in August of 2008. He was a big fan of the Toronto Maple Leafs, Winnipeg Blue Bombers, Goldeyes, Winnipeg Jets, Notre Dame Fighting Irish, and the Minnesota Vikings. He curled in the senior's league at Charleswood and was a member of the Charleswood Seniors.
His faith was a very important part of his life and Colin's early years were deeply influenced by his mother's brother - Rev John Kristalovich of Holy Family Ukrainian Catholic Church. He was an active member as a Eucharistic minister, reader and choir member at both OLPH and St Augustine's, plus a 3rd Degree Knight of Columbus at OLPH.
Colin developed an appreciation for music of all kinds. He was an original member of HOOSLI, the Macenko Memorial Choir and choirs at Holy Family and OLPH. His other love was Scottish Bagpipes and Drums. He played the drums in HMS Crusader Corps, the Sea Cadet Band, Tec Voc Band and lastly with the 26th Field Artillery Regiment RCA Pipes and Drums Band.
Colin met Brenda at WG McMahon in 1974. An accident brought them together but they were inseparable for the next 45 years. They were engaged on December 7, 1974 and married on June 7, 1975. They lived in Crescentwood as newlyweds before moving to a home in Charleswood in October 1977. They resided on Eldridge Avenue for 36 years before moving to Brandon, where they made a home for Mom and Dad to move in with them in October 2014.
Colin and Brenda were fortunate to have travelled extensively throughout Canada and the US plus the Caribbean and the Far East. They did everything together. They were a team through all of life's challenges. They faced his diagnosis of GBM Brain Cancer in May 2017 and made new plans. Colin continued to be busy even through three surgeries in eight months and radiation and chemotherapy. As time went on, he thrived despite his health issues. He enjoyed the weekly visits his brother Larry made out to Brandon for lunch. He never gave up hope and was so thankful for the wonderful doctors that gave him extra time with family.
We would like to acknowledge the teams from CancerCare in Brandon and Winnipeg, Dr. Tegg and the staff at Western Medical Centre and especially Dr. Jason Beiko, his neurosurgeon at Health Sciences Centre without whose expertise, Colin would not have lived past six months.
Colin gave the best hugs and his warmth and genuineness was felt by everyone who knew and loved him. He was a kind and gentle soul. We will miss him for all the joy, love and caring he brought into our lives.
To celebrate a life well lived, join with family and friends on Thursday, February 6, 2020, at 11:00 a.m. at Our Lady Of Perpetual Help Church at 4588 Roblin Blvd., Winnipeg with Reverend Barry Schoonbaert presiding. For those unable to attend in Winnipeg, a second service will be held on Friday, February 7, 2020, at 10:30 a.m. at Memories Chapel, 330-18th Street North in Brandon with Father John Okosun of St. Augustine's officiating. A reception will follow both services.
In lieu of flowers, donations can be made to CancerCare Manitoba Foundation, Brain Tumour Research, 675 McDermot Ave., Winnipeg, MB R3E 0V9.

Colin, our broken hearts will be joined together again. Until then, my love goes
with you always and forever.

Expressions of sympathy may be made at www.memorieschapel.com