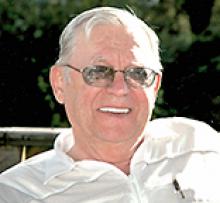 Francis Arthur Dyck, born July 24, 1933 in Rush Lake, Saskatchewan, died January 23, 2020 in Winnipeg.
He is survived by his loving wife Phyllis of 54 years; son Jason (Megan); daughter Charlene (Dave Harris) and five beloved grandchildren, Isabel, Samuel and Benjamin Dyck and Jack and William Harris; sister Caroline Kipling (Robert); as well as many other relatives.
Francis was predeceased by his mother and father, Peter and Elizabeth Dyck; brother Peter and sister Lily Toews.
Francis had many professions over the years: surveyor, grain buyer, RM secretary and town clerk, and selling insurance for The Co-operators. He retired in 1993, moving to Winnipeg in 1994, where he became very involved in genealogy. Over the years, Francis was a member of Lions, Mason and Eastern Star.
At Francis' request, cremation has taken place. His ashes will be scattered in Saskatchewan at a later date.
There will be a Come and Go Reception on Sunday, February 23, 2020 from 2:00 to 4:00 p.m. at 1630 Henderson Highway for family and friends.
In lieu of flowers, the family requests that a donation be made to the Mennonite Central Committee.