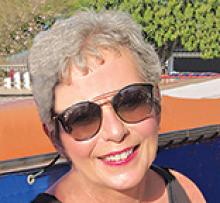 Kimberley Deegan, beloved wife of Matthew Deegan, passed away on Sunday, February 2, 2020, at the age of 60 years.
Kimberley was born on October 19, 1959.
You can thank Gale and Lee Walker for bringing her into this world. She also has a brother named Robert. He was often forgotten about as she was so much cuter than him. At a young age she tried to steal bubbles from the local drugstore. She was such a precocious little sh*t. On March 19, 1977, she decided to continue her career as a common thief and stole Matthew Deegan's heart, and on May 24, 1980, she married Matthew, son of Mary and Cliff Deegan. This was a poor choice on her behalf as he decided to get a perm for their wedding, but even with his poor decision they remained happily married for forty years. Soon they decided to have some children, Sean, Patrick and Caitlin. She didn't always like these kids but she kept them around just in case she needed chores done or a glass of wine filled, preferably a white wine with two ice cubes. These children also found some pretty okay spouses, Ashley, Alysa and Kyle who also learned very quickly how to pour a glass of wine. Her lovely and perfect children eventually decided to procreate giving her and Matt grandchildren, Mason, Jacob, Evangeline, Taylor, and two more bundles of joy arriving in the spring. She was the world's greatest Mimi and loved spending time with them, mostly because she got to send them back home at the end of every visit.
Kim enjoyed the little things in life, such as reading, gardening, cooking, traveling with her family and gossiping over a cup of coffee with her nearest and dearest friend Janet Kowal. She truly lived life with no regrets and would have done anything for her family. Her family was lucky to have such a strong, inspirational, beautiful, kind and hilarious woman who left them with many, many amazing memories.
The picture you are seeing of Kim was taken in Puerto Vallarta, Mexico, last year in March and would not have been possible if not for Dr. Pamela Chu and her amazing team at the Tom Baker Cancer Centre.
Condolences, memories and photos may be shared and viewed on Kimberley's obituary at www.McInnisandHolloway.com If friends so desire, on behalf of Kimberley Gay Deegan, memorial tributes may be made directly to the Foothills Country Hospice Society, P.O. Box 274, Okotoks, AB, T1S 1S1, Telephone: (403) 995-4673, www.countryhospice.org, or to the Alberta Cancer Foundation, c/o Tom Baker Cancer Centre, 1331 - 29 Street N.W., Calgary, AB T2N 4N2 Telephone: 1 (866) 412-4222. www.albertacancer.ca/memorial.
A special thanks to Dr. Paul Young and the caretakers at Calgary South Health Campus and Foothills Country Hospice for the care they provided for Kim during her short stay.
In living memory of Kimberley Deegan, a tree will be planted in the Ann & Sandy Cross Conservation Area by McINNIS & HOLLOWAY FUNERAL HOMES, Deerfoot South, 12281 – 40th STREET SE, Calgary, AB T2Z 4E6, Telephone: 403-203-0525.