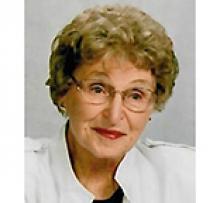 It is with profound sadness that we announce the passing of Ollie Olinyk, mother, sister, grandmother, aunt, cousin and dear friend to many.
Ollie was predeceased by her husband Mike; son Anthony (Sonny/Tony); parents, Steven and Katherine Gagaluk; and brother Walter. Left behind to cherish her memory are her children, Jim; Gayleen (Brian); Kathryn (Fred); daughter-in-law, June; grandchildren, Darren, Michael and Victoria (Nick); great-grandchildren, Chloe and Evie; as well as her surviving siblings, Nellie, Jean, Ann and Verna.
Ollie was born on September 18, 1923, in Broad Valley, Manitoba, to Steven and Katherine Gagaluk. Her early years were spent working on the farm, with some of her fondest memories being of the many animals her family raised, and cutting cord wood with her father. Ollie met the first love of her life, Mike, at a local dance, and they married on December 29, 1945. Following that, the family moved to South Transcona to raise their four children. Ollie was a devoted mother and wife. She loved her flower and vegetable garden, and was a fabulous cook and baker. Her cinnamon buns and paska were legendary. Whenever there was a gathering, the more people the better. Ollie's favourite hobbies included dancing and bowling. She enjoyed many hours with the people there.
Ollie was lucky and found love a second time, following the passing of Mike, with Gus, a lovely man from British Columbia. Following Gus' passing, Ollie returned to Winnipeg to live out the remainder of her life.
Ollie lived her life to the fullest – her house was never empty, nor her stove turned off. Her door was always open (and unlocked) for anyone who needed someone to talk to or a place to go. Ollie was happiest when surrounded by family and friends, and that is how we will keep her memory alive. She was also a member of the Transcona Memorial United Church, and the Royal Canadian Legion – Ladies Auxiliary, Transcona Legion Branch No. 7.
In her life, there were good times and hard times. Whatever was sent her way, she dealt with it and just kept going.
Ollie will be fondly remembered for her beautiful smile, enduring kindness, and unconditional love for her family, friends and community. She was, and forever will be, in our hearts.
Our family would like to thank those who showed their kindness towards Ollie in these last few years, and those who lent support to our family during these trying times.
A final thank you to the staff of East Park Lodge and Park Manor Personal Care Home – our angels on earth.
Funeral service will be held on Thursday, February 13, 2020, at 2:00 p.m., at the Transcona Memorial United Church, 209 Yale Avenue West, in Transcona, Manitoba. Interment will take place at the Transcona Cemetery.
In lieu of flowers, donations in Ollie's memory can be made to the Transcona Memorial United Church Building Fund, 209 Yale Avenue West, Winnipeg, MB R2C 1T9.

"Sunshine passes, shadows fall,
Loves remembrance outlasts all.
And though the years be many or few,
They are filled with remembrance of you."