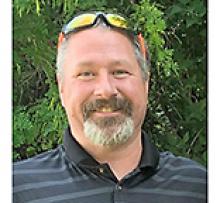 
It is with profound sadness and heavy hearts that we announce the tragic passing of our son, father, brother, nephew, uncle and papa, Tim Sexton, at the age of 47 years old.
Tim is survived by his wife Theressa; daughter Melissa McCannell (Kyle); son Mark Sexton (Ashley Kaatz); granddaughters, Emma and Ali; parents, Echo Sexton (Ken), Phillip Sexton (Rita); brothers, Kevin Sexton (Roxanne), Neil Sexton; sister Candace Heywood (Andy); sister-in-law Ruth Wiens (Art); brother-in-law Tim Wiens (Kris); auntie Heather Goulet (Paul); as well as numerous aunts; uncles; nieces; nephews; cousins; and friends. He was predeceased by his grandparents, Violet Arnason (nee Page), George Ford, Hazel and John Sexton.
Tim was born in Winnipeg, Manitoba, on December 21, 1972. He grew up in West St. Paul where he attended Stony Mountain Elementary School and Lord Selkirk Regional High School. Tim worked for the family business, Simpson's Transfer and Feed, his entire life. He was very proud to have attained his Red Seal in Truck and Transport Mechanics at the age of 44. Tim could fix absolutely anything and took pride in his work. Tim spent almost 30 years as the crew chief for his brother Kevin's' car racing team at the Speedway.
Tim was a devoted father and papa. Tim was his sons' biggest fan and spent endless hours at the hockey rink and at the starting line cheering Mark on as he raced motocross, quads and sleds. Tim loved playing "go fish" with his granddaughters and teaching them how to ride the mini Z. He loved doing puzzles, playing games and watching movies with his daughter. He loved camping, fishing, boating, quading, snowmobiling and games. He was on three different sports teams at the time of his passing, ball hockey, spongee and volleyball. He was very competitive in everything he did. He didn't like to lose. Tim was always there to lend a hand to those in need and was known to be at the back of the pack while quading watching over everyone. Tim's favorite colour was "orange". If it was orange, it was his.
Memorial service will be held on Thursday, February 13, 2020, at 2:00 p.m. at Birchwood Funeral Chapel, 162 PTH 52W in Steinbach, Manitoba.
Tim was dedicated to donating blood on a regular basis. He was proud to have donated 34 times. We ask, in lieu of flowers, donate blood at Canadian Blood Services.