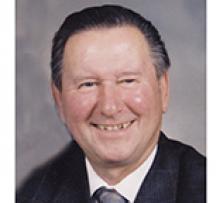 With heavy hearts we announce that Lorry passed away on February 6, 2020, at the Carberry Personal Care Home.
Left to cherish his memory are daughter Pamela Ferguson, two sons, Philip and Paul (Penny), granddaughters, Candace Malcolm and Carol Lougheed, grandsons, Nicolas and Joseph, and great-grandchildren, Johnny, Jack and Carlee. He is survived by one sister Evelyn Schober. He is also survived by brother-in-law Steve Novak, sister-in-law Jean Stach, sister-in-law Mabel Mochnacz, sister-in-law Dolores and brother-in-law Steve Zegalski, sister-in-law Vivian Stach, and many nieces, nephews and cousins.
He was predeceased by his wife Margaret Balabanski (nee Stach), who passed on December 29, 2000. He was also predeceased by his father John Balabanski and mother Katherine Balabanski-Fedorko (nee Oleksuk), and step-father Alec Fedorko, as well as sons-in-law, Johnny Malcolm and Bruce Ferguson, and great-grandson Christian Lougheed. He was also predeceased by sister-in-law Lavinia Novak, brothers-in-law, Ernest and Steve Stach, and brother-in-law Mike Mochnacz.
Lorry was born on January 21, 1934 in Winnipeg. His father John Balabanski immigrated to Canada from Poland and Katherine Balabanski was born in St. Norbert. They married and began their family and farm life in Culross, MB. In his early years Lorry grew up on the farm with his parents and sister Evelyn. When Lorry was six years old his father passed away suddenly, leaving Lorry, sister Evelyn and his mother to operate the family farm. Lorry quickly grew up after his dad died, having to learn to seed and harvest the grain crops. He learned how to operate heavy machinery and farm equipment as well. Lorry also learned to drive a grain truck at the age of six. He would steer and his mother would operate the gear stick and foot pedals. This seems hard to imagine, however it is a true story. This was one of Lorry's favourite stories to tell of his young life on the farm. They eventually sold the farm and moved to Winnipeg. This is where Lorry met Margaret and they married on July 30, 1955. Lorry worked at various jobs in Winnipeg before moving to Flin Flon in 1966 to begin his career in the hotel business with his brother-in-law Steve and sister-in-law Lavinia Novak. A very short time later in 1966, Margaret and Lorry moved to Carberry where they managed the Nelson Hotel & Motel and shortly thereafter, they purchased the hotel. This is where they raised their family and ran the business. They sold the hotel in 1985 and happily retired. Lorry was also involved as a town councillor and deputy mayor of Carberry for several years.
Some of Lorry's favourite pastimes were flying his plane and travelling. Lorry and Margaret enjoyed many trips with family and friends. They owned a condo in Hawaii, and this was a highlight of their lives. Margaret and Lorry purchased a cottage at Delta Beach after retiring, where they spent many years enjoying Lake Manitoba with family and friends. Lorry loved his time at the lake, working and tinkering with many projects around the cottage and yard. He would sit on the deck at the lake, look out at the water and say that it was just like Hawaii. The lake was a very special place for the family, and we have many fond memories of our times at the lake with Lorry. Margaret and Lorry were married for 45 years, and Lorry dearly missed her after Margaret lost her lengthy battle with cancer. He later found companionship with Sonia Pickup and they spent several good years together before she passed away.
Lorry was a devoted husband, father, grandfather, great-grandfather, uncle and friend. He was known for his common-sense approach in all aspects of life and business. Lorry was a gentle and kind man with a great smile that made everyone's day better. In his final years, even though Lorry could not verbally communicate, he always had a smile and a twinkle in his eyes. His warm heart was felt just by being near him. We will all love and miss you our dear Lorry. "Earth has no sorrow that heaven cannot heal".
A special thanks to his son Philip for visiting Lorry everyday at the care home, this brought great comfort for Lorry and the family. Thank you to all the staff at the Carberry Personal Care Home for taking such wonderful care of Lorry.
Cremation has taken place and a memorial service will be held on Friday, February 14, at 11:00 a.m. at Our Lady of Assumption Catholic Church, 224 Lisgar Street in Carberry and will be conducted by Father Mark Filips. Interment will be at a later date.
In lieu of flowers, donations may be made to the Carberry Personal Care Home, PO Box 2000, Carberry, MB R0K 0H0.