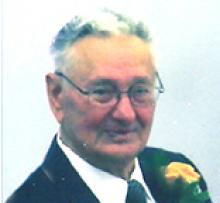 
William Bilan passed away February 10, 2020, at the age of 94 years.
Left to mourn his passing is his wife of 67 years, Jean (Turchyn), daughter Gail (Nelson), son Wayne (Michelle), grand-children: Jonathan, Stephanie, Mailyne, Jolaine (Alex) and Eric (Anita), as well as four great-grandchildren.
Dad was born and raised in Gardenton, Manitoba, moving to Medika in 1949. He married Jean in 1952 and together they raised their family and farmed until his retirement in 1984. Dad was a longtime President of the Ukrainian Catholic Parish of Ascension of Our Lord, in Hadashville, Manitoba.
Funeral service will be held on Saturday, February 15 at 9:00 a.m. at the Hadashville Recreation Centre, 45030 PTH 11, Hadashville, MB, with Deacon Stefan Tyrawski officiating. Interment will follow at the Birch River Cemetery, 50117 PR 506 in Medika.
Flowers are gratefully declined. If you wish, a donation may be made in Dad's honour to the Birch River Cemetery, c/o Gail Wasylnuk, PO Box 11, Group 16, Hadashville, MB R0E 0X0.