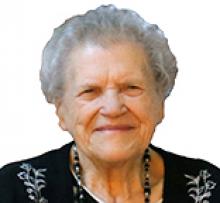 It is with a heavy heart and much love that heaven gained a new angel Tuesday, February 4, 2020.
Ewhenia was born May 2, 1921 in the Selo Hilche, Povit Sokal, Western Ukraine. The eldest of six children she enjoyed going to church and singing, two things that she continued with throughout her life. In 1941, she moved to Germany for hard labour. Her and the love of her life, Mychailo (Michael) Chumak briefly returned to Ukraine in 1943 to get married and then immediately returned to Germany. She would not see her remaining siblings again until a visit in the summer of 1993. Their daughter Helena was born the beginning of 1945 and soon after the end of the war, they moved to Belgium, where their son Orest was born in 1950. A year later in 1951, the family took passage to Canada and settled in Winnipeg, Manitoba.
Her life in Canada was very full. While raising her family, she also worked as a sewer for a garment factory up to her retirement. Her and Mychailo were very active in the Ukrainian community. She was a member of Sts. Vladimir and Olga Ukrainian Catholic Metropolitan Cathedral, the local branch of the Ukrainian Catholic Women's League, the Canadian Institute of Prosvita (where she also sang in their choir for a number of years), the League of Ukrainian Canadians (women's branch) and the Zoloty Vorota Seniors group in her later years prior to moving to Edmonton, Alberta. While in Edmonton, she lived at the Ukrainian Dnipro Senior Citizens Home for eight years prior to moving one last time to the Trinity Lodge in Calgary, Alberta, again to be close to her daughter, grandchildren and great-grandchildren.
Ewhenia will always be remembered for her generosity to others, her gracious hospitality and artistic abilities. She spent endless hours knitting for her grandchildren, embroidering and creating her signature tortes and korovais (traditional wedding breads). May she now rest in peace and be forever in our hearts, Vichnaya Pam'yat!!
She is survived by her loving daughter Helena Domytrak, granddaughters, Irene (Andrew) Demchuk, Larysa (Myron) Gelleta, Tanya (Ben) Gilchrist, great-grandchildren, Boyan, Lukian, Maksym, Anastasia, Justina and Zorianna. She is also survived by her many nieces, nephews and cousins in Ukraine, Poland and Canada. She was predeceased by her parents, Mychailo and Maria, siblings, Veronica, Slavka, Zenon, Yvan and Theodore, son Orest Chumak (1972) husband Mychailo Chumak (1989), and son-in-law Walter Domytrak (2017).
The family would like to thank the staff at Trinity Lodge for the support they provided in her final years.
Memorial prayers "Panachyda" will be at 7:00 p.m. on Friday, February 14 at Korban Funeral Chapel, 907 Main St. Funeral Divine Liturgy will be celebrated at 10:30 a.m. on Saturday, February 15 at Sts. Volodymyr and Olha Ukrainian Catholic Metropolitan Cathedral, 115 McGregor St., followed by interment at All Saints Cemetery.
In lieu of flowers, the family asks that donations be made to the Sts. Vladimir and Olha Ukrainian Catholic Metropolitan Cathedral, Winnipeg, MB or a charity of their choice.

May she now rest in peace and be
forever in our hearts, Vichnaya Pam'yat!!