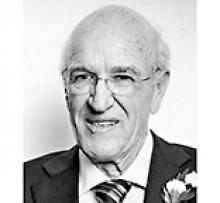 Peacefully, with his family near, Harold passed away at the Emerson Personal Care Home, at 91 years of age.
He was predeceased by his parents, Tom and Ruth Ostberg, Jessie Ostberg, and, as he was an only child, his Ramsey sisters and brothers-in-law.
Harold is survived by his wife of 67 years, Doreen (Ramsey) Ostberg, their four children: daughter Vicki (Randy) Gushuliak, sons, Randy (Lorraine), Mitch (Anna), Carl (Julie), and daughter-in-law Barb; also his 10 grandchildren, Lane (Jennifer), Ashley (Bru), Calee (Drew), Brett (Danielle), Haley (Garrett), Tia (Kevin), Alisha, Dylan (Lindsay), Macey (Nathan), Lexus, and his five great-grandchildren, Jack, Kaitlin, Ruby, Everly and Alex.
Harold was born and raised on the family farm near Dominion City, MB, where he spent his life as a third generation grain farmer on land bought by his father and his grandfather. The land continues to be farmed by two of his sons and their children, making it a fifth generation farm.
Farming was his life, but flying and hunting were his passions. He pursued both very extensively.
Harold was an unassuming, easy going, gentleman who never had a bad word to say about anyone. He lived a full and interesting life and will be missed. He will be honoured at a later date in March with an announcement to follow at that time.
The family wish to thank the staff of the Emerson Personal Care Home. They provided kind and dignified care that was very much appreciated.
In lieu of flowers, a donation may be made in memory to the Dominion City Community Hall or the Sturgeon Foundation.