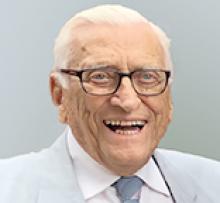 Sig was born in Somolowka, Southern Russia (now Ukraine) on April 16, 1924. His family came to southern Manitoba in 1925. As immigrants from post-revolutionary Russia, the family farmed at St. Elizabeth, Manitoba until 1933 when his father, the Rev. J.H. Enns was called to Winnipeg where he became the leading minister of the growing First Mennonite Church.
Sig is survived by his sons: Carl (Robyn Peterson), Kamloops, BC, Christopher (Helen Janzen), Winnipeg, MB and Curtis (Nadine Duhil), Guelph, ON; grandchildren, Mark, Shannon (Gary Porter), Erika, (Brian Lewis), Andrew, Louise, Jean, Selma; great-grandchildren, Freya and Edie; brothers, John and Henry (Marie), sister-in-law Irene, and many nieces and nephews.
He was predeceased by his wife of 62 years, Vera (Loewen), an infant sister Johanna in 1924, brothers, Ernie and Harry, sisters, Marlies and her husband Horst Friesen, Selma and her husband Peter Enns. He was particularly saddened by the untimely loss of his daughter Cathryn in 1989.
Sig was an active member of First Mennonite Church where his father baptized him in 1943. He served as a Sunday School teacher, choir member, soloist and church council member. He was also active as a choir member and soloist in the United Church in The Pas, Swan River and Portage la Prairie.
In 1947, Sig answered a call from M.C.C. (Mennonite Central Committee) for "Sea Going Cowboys". This involved joining the U.S. Coast Guard to work for the United Nations Rehabilitation Association to deliver horses to Poland from Newport News, Virginia and cattle to China via the Panama Canal. (Yes, Sig walked on the Great Wall of China). In between trips he worked for M.C.C. in Akron, Pennsylvania.
Sig began his education in a one-room country school but eventually earned three degrees from University of Manitoba (B.A. B.Ed. and BSW). He was a teacher in Winnipeg, a Social Worker in The Pas and Swan River before becoming Executive Director of the Children's Aid Society of Central Manitoba (offices in Portage la Prairie), in 1958.
When in Portage la Prairie, Sig was elected to the school board and then won three elections as the Member of Parliament for the federal constituency of Portage Neepawa. He served on several standing committees: Agriculture, Immigration, Health and Welfare, Food and Drug and others. He was also Chairman of the Annual National Parliamentary Prayer Breakfast.
After his career in politics, he became Regional Director in the Manitoba Department of Health and Social Services. In 1978 Sig was appointed CEO of Concordia Hospital, a position he held until his retirement at the age of 67 in 1991. He also served as certified member of the College of Health Services Executives, as lay member on the Medical School Accreditation Committee and Chairman of the Manitoba Human Rights Commission.
He was a past member of Rotary Clubs of Portage La Prairie, Ottawa, and Winnipeg. He served on the boards of The United Way (Health Care Division), The National Welfare Council, The Vanier Institute of the Family (as a charter member), Concordia Hospital, Bethania Mennonite Personal Care Home, Menno Simons College and the Mennonite Benevolent Society.
For many years Sig had a farm in the Pigeon Lake and Marquette area and a general store in St. Francois Xavier, all run by the family.
Above all, Sig treasured the relationship with his family and friends. He kept an affectionate, loving and supportive contact with all, frequently travelling to British Columbia and Ontario to visit family. He enjoyed playing chess, bowling, mini golf and cycling with his grandchildren, even in his 90's. He liked to talk about his above average grandchildren and great-grandchildren. Sig was a positive influence on so many people. He will be dearly missed.
Memorial service will be held Saturday, February 22, 2020, at 2:00 p.m. at the First Mennonite Church, 922 Notre Dame Avenue.