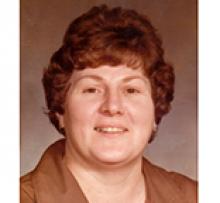 
Peacefully on the afternoon of Wednesday, February 12, 2020, Marlene H. Walker passed away, with her family by her side, at the Portage and District General Hospital, at the age of 81 years old.
Marlene "Bubs" will be lovingly remembered by her son Mitchell (Glory) Walker; sister Eleanor Smith; brother Joseph (Agnes) Mitchell; sister-in-law Patricia Murrin (Mike Conant); nieces, Shelley Mitchell (Richard Muller) and Donna (Rob) Yanke; nephews, Brent and Scott (Krista) Mitchell; great-nieces, Erika Mitchell and Hayley Gentry; great-nephews, Tyler, Brendan, Michael and Luke Mitchell, and Derek Yanke, granddaughter Mandy (Peter) Sharkey; great-grandchildren, Wyatt and Zoe Lavallee; cousins, Margaret Ceretti, Janet Gurke, Joan Payment, Sharon Barnett and Leonard Holyk; special friends/neighbours, Audrey MacNeal (nee LaPointe), Vera Drabot, Anne Curtis, Allison Sandney, Patty Hryciuk and Kathy Lilley.
Marlene was predeceased by her husband James D. Walker (JD), her parents, Joseph and Olga Mitchell (nee Tenoski), brother Gordon "Corky" Mitchell, aunts, Lillian (Peter) Pallick, Helen (Joseph) Sagal and Anne (Michael) Holyk, uncles, Michael (Anne) and Carl Tenoski, brother-in-law Alvin Smith, cousins, Sandra Manko and Bernice Lanouette, and close friend Marion Caister.
Marlene was born and raised in Portage la Prairie and resided her entire life in the North End, beginning on Third Street North West and the remainder on First Street North West.
Marlene was working at the Macdonald Air Force Base as a stenographer when she met her husband JD who was there as a member of the Royal Canadian Armed Forces. They were married on November 28, 1959 and then were transferred to Barrie, Ontario. They transferred back home to CFB Portage la Prairie in 1964, the year Mitchell was born. JD was often away from home as he travelled with the R.C.A.F. Golden Centenaires aerobatic display team and then as a member of the United Nations Peacekeeping Forces in Damascus, Syria. JD's absence meant that Marlene needed to be one of the first working mothers of her generation. Marlene worked, raised her son, and cared for her mother tirelessly on a daily basis.
Marlene joined the Portage la Prairie School Division in January of 1975. She began and ended her 35 year career as the school secretary at La Verendrye School (LVS). Mrs. Walker forged a multitude of relationships with numerous students, parents, teachers, teacher's aides, operations staff, custodians, principals and vice principals during her career. From applying Band-Aids and assisting sick students, typing, filing, answering the phone, and constantly filling her candy dish, Marlene loved on everyone she encountered in her own unique way. Marlene put forth daily acts of kindness and sought little in return.
Marlene's father Joe was of Scottish descendants and she enjoyed listening to the bagpipes - especially Amazing Grace. She also loved the jigs and reels of the Maritimes where her husband was raised. Marlene's mother and grandmother were from Ukrainian ancestors and she loved the food, culture, and traditions. Although not fluent, she knew enough of the Ukrainian language to converse with several North End colleagues, neighbours, and friends. Marlene was very close to her mother and inherited her "green thumb" and she maintained a vegetable and flower garden and several houseplants for many years.
Family, close friends and neighbours were extraordinarily important to Marlene. She knew everyone's birthday and phoned them birthday wishes faithfully every year.
The family wishes to thank all the doctors, nurses, nurses aides and all the support staff at the Portage and District General Hospital. Many of these professionals she knew as students at LVS, and became close with while in hospital. A special thank you to Dr. Alyssa Delaquis and Dr. Gregory Harding at the Vascular Clinic at Health Sciences Centre.
Viewing and visitation will take place at McKenzies Portage Funeral Chapel on Thursday, February 20, 2020, from 7:00 p.m. to 8:00 p.m. Funeral service will be held at 2:00 p.m. on Friday, February 21, 2020, at McKenzies Portage Funeral Chapel, led by Ray Wilms.
As expressions of sympathy, if friends so wish, donations may be made in Marlene's memory to the Heart & Stroke Foundation of Manitoba, 1379 Kenaston Boulevard, Winnipeg, MB R3P 2T5.